Space A Mosaic of Cassiopeia

NASA Picture Of The Day
A Mosaic of Cassiopeia 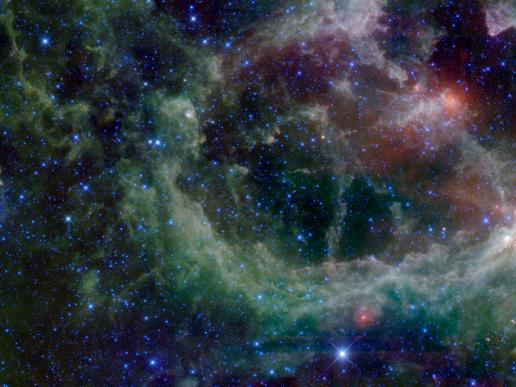 This mosaic of images from the Wide-Field Infrared Survey Explore, or WISE, in the constellation of Cassiopeia contains a large star-forming nebula within the Milky Way Galaxy, called IC 1805 or the Heart Nebula, a portion of which is seen at the right of the image. IC 1805 is more than 6,000 light-years from Earth. Also visible in this image are two nearby galaxies, Maffei 1 and Maffei 2. In visible light these galaxies are hidden by dust in IC 1805 and were unknown until 1968 when Paolo Maffei found them using infrared observations. Both galaxies contain billions of stars and are located some 10 million light-years away. Maffei 1 is a lenticular galaxy, which has a disk-like structure and a central bulge but no spiral structure or appreciable dust content. Maffei 2 is a spiral galaxy that also has a disk shape, but with a bar-like central bulge and two prominent dusty spiral arms. Image Credit: NASA/JPL-Caltech/UCLA (More at NASA Picture Of The Day)

Space In the Constellation Cassiopeia

A Mosaic From Mars Odyssey