A Stranded Nigerian Cosmonaut and DEFA's The First Spaceship On Venus

Spam and phish messages appear daily in my email. When I receive the latter, I dutifully forward them as attachments to the IRS, Wachovia Bank, Paypal or whatever organization the online crooks are trying to impersonate. As I do so, I fantasize about ejecting the offending thieves out the nearest airlock.

But here is an interesting twist to the Nigerian “419” scams: Send money to help a stranded Nigerian cosmonaut!

Disclaimer to anyone dumb enough to believe this: THIS IS A SCAM. IT IS NOT REAL. IF YOU SEND ANY MONEY TO THESE SCUMBAGS, YOU WILL NOT RECEIVE ANY COMPENSATION. THIS MESSAGE WAS SENT BY CROOKS. DO NOT SEND MONEY TO THEM.:

I am Dr. Bakare Tunde, the cousin of Nigerian Astronaut, Air Force Major Abacha Tunde. He was the first African in space when he made a secret flight to the Salyut 6 space station in 1979. He was on a later Soviet spaceflight, Soyuz T-16Z to the secret Soviet military space station Salyut 8T in 1989. He was stranded there in 1990 when the Soviet Union was dissolved. His other Soviet crew members returned to earth on the Soyuz T-16Z, but his place was taken up by return cargo. There have been occasional Progrez supply flights to keep him going since that time. He is in good humor, but wants to come home.

In the 14-years since he has been on the station, he has accumulated flight pay and interest amounting to almost $ 15,000,000 American Dollars. This is held in a trust at the Lagos National Savings and Trust Association. If we can obtain access to this money, we can place a down payment with the Russian Space Authorities for a Soyuz return flight to bring him back to Earth. I am told this will cost $ 3,000,000 American Dollars. In order to access the his trust fund we need your assistance.

Consequently, my colleagues and I are willing to transfer the total amount to your account or subsequent disbursement, since we as civil servants are prohibited by the Code of Conduct Bureau (Civil Service Laws) from opening and/ or operating foreign accounts in our names.

Needless to say, the trust reposed on you at this juncture is enormous. In return, we have agreed to offer you 20 percent of the transferred sum, while 10 percent shall be set aside for incidental expenses (internal and external) between the parties in the course of the transaction. You will be mandated to remit the balance 70 percent to other accounts in due course.

Kindly expedite action as we are behind schedule to enable us include downpayment in this financial quarter. Please acknowledge the receipt of this message via my direct number 234 (0) 9-234-XXXX only. 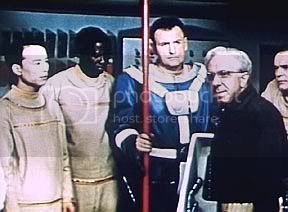 So now even the cosmos is employed to dupe the mentally-challenged out of their money. After all, everyone should know that the first African cosmonaut was Communications Officer Talua (actor Julius Ongewe) from Der Schweigende Stern (The Silent Star), better known in the West as The First Spaceship On Venus!

On that tragic mission, Talua and American astronaut Robert Brinkman (actor Günther Simon) perished when they were unable to return to the Kosmostrator spaceship as it was hurled into space by the uncontrolled Venusian energy-mass converter technology.

And, I should mention, that for the first time the complete, original version of Der Schweigende Stern is available for purchase, in Region 1 NTSC format, both as a single DVD and as part of the impressive DEFA Sci-Fi Collection three-DVD set.

[img2=right]http://i81.photobucket.com/albums/j219/Kosmosflot/Poster/Omega06.jpg[/img2]This East German/Polish production was probably the first Eastern Bloc film that I ever saw, and it’s well-remembered by science-fiction fans for its beautiful rocketship, The Kosmostrator, and the eerie depiction of the surface of Venus. And there was the cute little chess-playing, tank-like robot, Omega, which for whatever reason was dubbed as “Oh-me-GAH”.

The First Spaceship On Venus was often shown on Indiana’s WTTV Channel 4 during the mid-60s. The first time I saw it, I was shocked when the American astronaut arrives at the cosmodrome in a MIG-15 jet! What?!? I’ve not yet seen the original film, but apparently in it the U.S. refuses to support the mission to Venus, and the American crew candidates actually defect in order to participate! I hope to confirm this amazing Cold War plot twist with a future viewing of the DEFA DVD. It is certainly edited out of the dubbed version.

So, don’t send any money to Nigeria to save some poor African cosmonaut. Save your kopeks to rent or buy The First Spaceship On Venus or the DEFA Sci-Fi Collection instead! 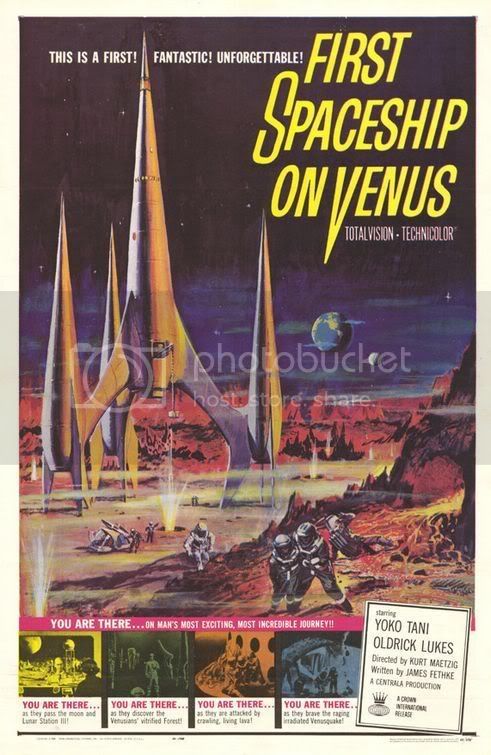 Watch the first nine minutes of the sci-fi flick. (FilmForce)

S
Stranded on a desert island