NASA Picture Of The Day
A Subtle Difference 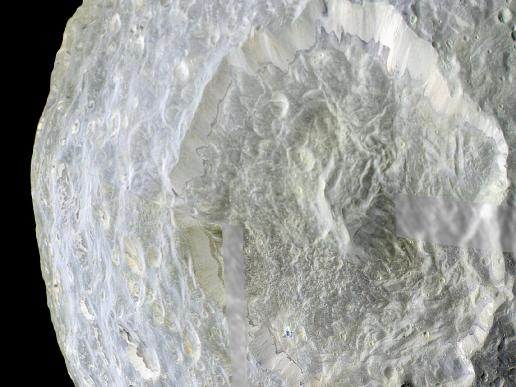 Subtle color differences on Saturn's moon Mimas are apparent in this false-color view of Herschel Crater captured by NASA's Cassini spacecraft during its closest-ever flyby of that moon. The image shows terrain-dependent color variations, particularly the contrast between the bluish materials in and around Herschel Crater and the greenish cast on older, more heavily cratered terrain elsewhere. The origin of the color differences is not yet understood, but may be caused by differences in the surface composition between the two terrains. False color images from Cassini's previous closest encounter, in 2005, also showed such variations. The natural color of Mimas visible to the human eye may be a uniform gray or yellow color, but this mosaic has been contrast-enhanced and shows differences at other wavelengths of light. During this flyby on Feb. 13, 2010, Cassini came within about 5,900 miles of Mimas and these images were obtained with Cassini's narrow-angle camera on that day at a distance of approximately 10,000 miles from Mimas. The images were re-projected into an orthographic map projection. A black and white image, taken in visible light with the wide-angle camera, is used to fill in parts of the mosaic. Image Credit: NASA/JPL/Space Science Institute (More at NASA Picture Of The Day)

Space Viewing the Universe in a different light