About The War Against The Chtorr

I really enjoyed David Gerrold's book and just to give you a glimpse of his writing style I invite you to read a few chapters from his pages.
The War Against The Chtorr
Click on the book cover to read selected sections of that book.

Here's an interview with David

The 5th Book in the Chtorr Series

♦ A Method For Madness ♦

In the past year, I’ve had four major writing spurts. The total number of words finished is now more than 250,000 words, not counting all the stuff that will go between the chapters.

And until July 4th weekend, it was my expectation that book five, A Method For Madness would end up the biggest book in the series. With another 50,000 words left to write, it looked like it would top out at 300,000 words.

But my publisher, Tom Doherty of Tor Books, said that this could present production problems, and suggested that I might want to think about breaking the book into two volumes. At first, I was resistant to the idea. I didn't see any logical place to break the narrative, and I really did want this to be a big book. But then, as I let the idea percolate, I began to see that it might work very well indeed.

There are now 166,000 words of A Method For Madness finished, plus 30,000 words of interstitials (the little asides between the chapters), and another 66,000 words finished on book six, A Time For Treason. Plus a few chapters for book seven, as well. The 66,000 words I took off the end of book 5 were better suited in book 6 — where I could expand them the way they needed to be expanded. The remaining 166,000 words of book 5 will still grow to about 210,000 before I’m done, and it will be as fully fleshed out as it should have been in the first place. My mistake was trying to fit too much into the one book in the first place. This is better. You’ll see. (Plus, it gives me a head start on book six.)

In A Method For Madness, Jim finally gets to go deep down inside the Amazon mandala -- not just what’s on the surface, but what’s underneath as well. And then, later on, in A Time For Treason, he gets to discover what’s under Manhattan as well. The parallels and contrasts between the two sequences have been a lot of fun to write. But it’s also a lot of hard work too, especially trying to keep all the details consistent. I’m exhausted just thinking about the parts left to write.

Oh yes, and there’s also this one sequence where Jim finally explains what’s really going on with the worms. That’s worth a couple of “Yikes!” It brought me out of my chair a couple of times as I realized some additional implications of the invasion.

The bad news is that I’ve given up trying to predict when all this will be done. It'll be done when it's done. I'd like to say this year, but I've said that before too. Be patient, these things are hard to write.
Click to expand...

The 6th Book in Chtorr series!

It will be called A Time For Treason, and I've already signed the contract for it. As I said above, 66,000 words are already finished. The seventh (and final) book will be A Case For Courage, and the last seven chapters of it are finished as well.
Click to expand...

♦ A Method For Madness ♦

Folks who are on our newsletter list have already seen preview chapters of the next book in The War Against The Chtorr. Now we're making them available here on the website. Just click here and enjoy.
Click to expand...

The chopper jerked in the air. The pilot pulled the machine around in a tight turn, nearly sliding us sideways out the open door. Lizard grabbed for me—a reflex. She clutched at my arm only for a moment, then pulled herself up, swearing like a longshoreman. Angrily, she began untying the restraints that still held her firmly in her stretcher.
Click to expand... 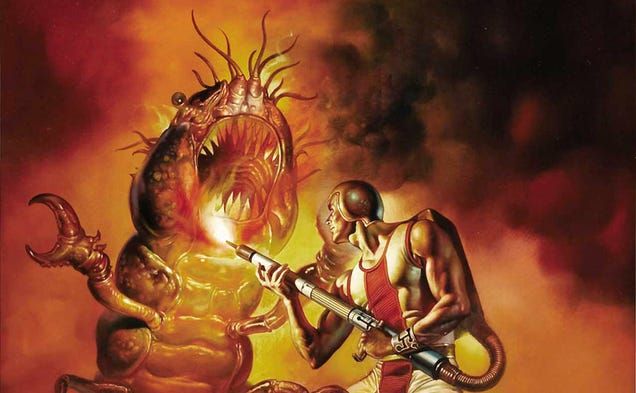 David Gerrold tells io9 that A Method For Madness, the fifth book in his Chtorr series, will be done in a couple of months.


i09 said:
Fans started to get their hopes up when they saw A Method for Madness listed as coming out in September, according to Barnes and Noble and a few other sites. So we checked with Gerrold and he said that the book won’t be published in September, but “it will be finished by then.” Is this the final book in the Chtorr series? Nope, says Gerrold—“there are seven books in this trilogy.”
Click to expand...

after 22 years of being stuck?
I was a fan of this series but c'mon!

The War Against the Rull by A E Van Vogt

Of War and Consequence, Book One of the Consortium Chain