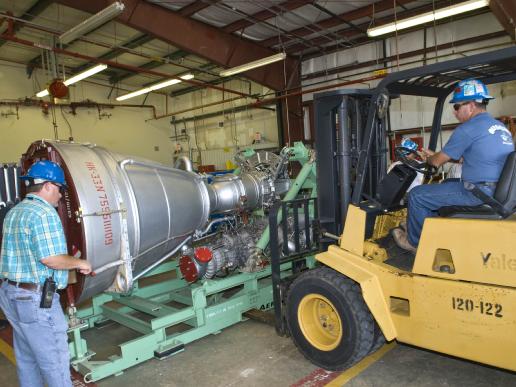 An Aerojet AJ26 rocket engine was delivered to NASA's John C. Stennis Space Center on July 15, 2010. This is the first of a series of Taurus II engines to be tested at Stennis to include acceptance testing of flight engines. Stennis will provide propulsion system acceptance testing for the Taurus II space launch vehicle, which is being developed by Orbital Sciences Corporation of Dulles, Va. The first Taurus II mission will be flown in support of NASA's Commercial Orbital Transportation Services cargo demonstration to the International Space Station. Orbital's Taurus II design uses a pair of Aerojet AJ26 rocket engines to provide first stage propulsion for the new launch vehicle. Image Credit: NASA (More at NASA Picture Of The Day)