Alias Reboot in the Works? 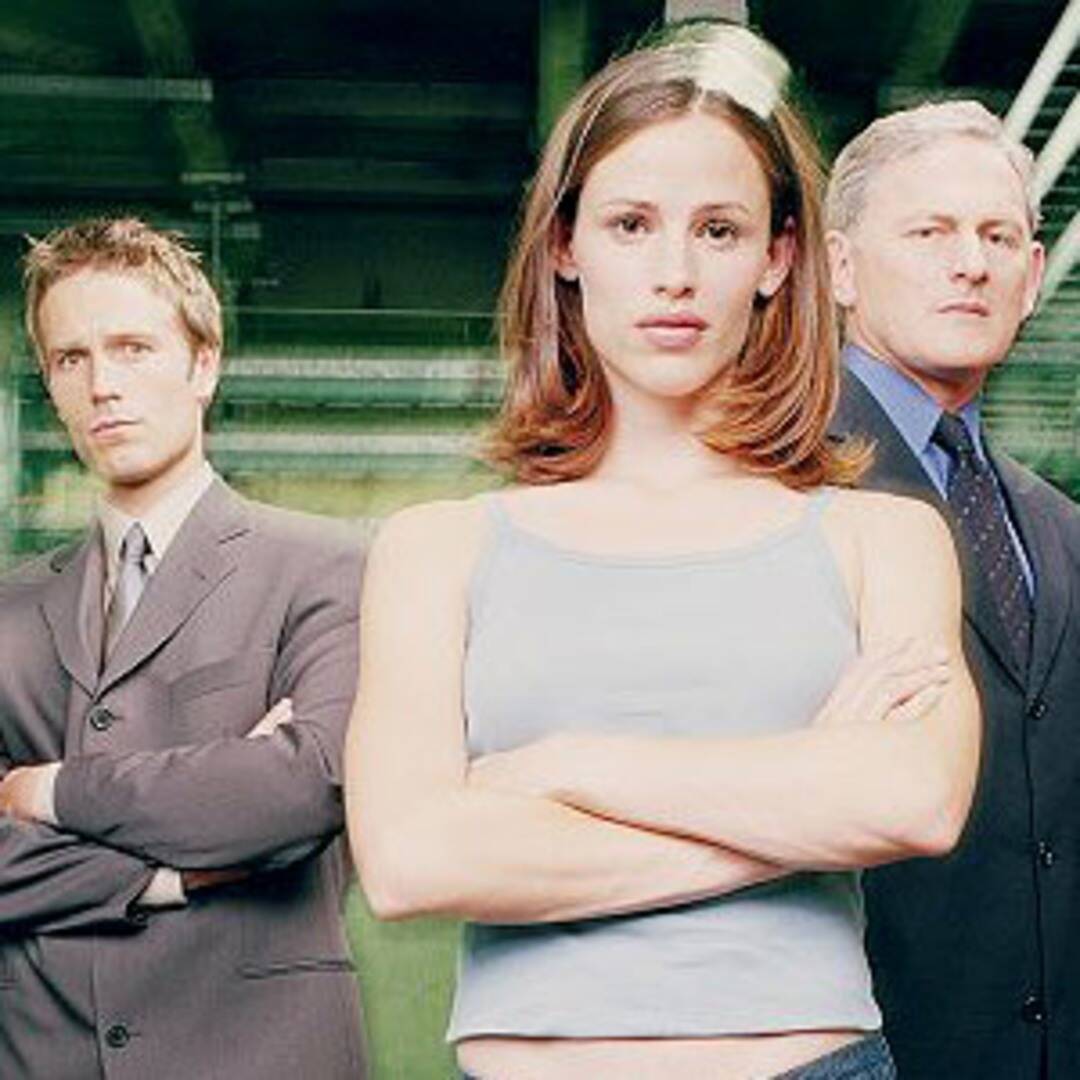 Plus, meet the star of the CW's new butt-kicking series, Nikita

^ I'm more concerned about the lack of Jennifer Garner and Victor Garber than the lack of Rambaldi, personally, but it would still be worth a look. We'll see...

I never really cared about Rambaldi but the show won't be the same without the original cast. I'm not so enthousiastic about this.

That would be awesome!!!

Even though I am looking forward to "UnderCovers" on NBC by JJ Abrams - the show has been dubbed the "After-Alias' ... since Syd and Vaughn got marrried and left the CIA ... this new show brings back this married couple into the CIA back ... and the traielr for the show, looks amazing!!!

On USA they are doing a "Covert Affairs" which has also been dubbed an "Alias 2.0" ... different heroine though, but same premise ...

And then ofcourse you have the "Leverage" series on TNT ... a group of con-artists who work a-la-Alias ...

Anything that can bring me back into the "Alias"-life ... I'll be watching ... so I hope ABC does this and I can have another "Alias"-fix ... maybe Jennifer or Michael or Victor won't be there ... but they should definitely make a guest appearance ...

ABC May Reboot 'Alias': Our Picks for TV Shows That Deserve Another Shot
Friday, May 28, 2010
Meghan Carlson
Senior Writer, BuddyTV

A "reliable insider" at ABC has let it slip that the network is in very early talks to reboot J.J. Abrams' successful spy series Alias, reports E! Online.

Kristin Dos Santos got the scoop, and also quotes the insider as saying that an Alias 2.0 would merely "borrow elements" from the series that combined the talents of Jennifer Garner, Victor Garber and Michael Vartan in an increasingly complex brew of mystery and mythology.

In other words: No Rambaldi prophecy. But maybe a new Sydney Bristow! Exciting, yes--but, again, these talks are still very initial. And it's more likely than not that Abrams would not be involved.

Like any network with an itch for a big-name remake, ABC's final decision won't be so much about improving an already spectacular original, but capitalizing on it:

'According to this source," writes Dos Santos, "ABC is hoping to hold onto its lost Lost audience with a re-envisioned J.J. Abrams series, in light of FlashForward not working out so well."
We may not know what will become the next Lost (as if anything ever could be!) but we do have our own ideas about canceled shows that deserve a good ol' Hollywood spit and polish.
Click to expand...

It's only been five years since ABC canceled the Jennifer Garner star-making vehicle 'Alias,' and yet insider sources claim ABC is ready to reboot 'Alias' as a possible replacement for 'Lost.' Really, are they serious?

Sure, there's a connection between the two shows in that J.J. Abrams created (or co-created) both series, but currently J.J. is busy with a new fall 2010 show on NBC called 'Undercover,' so he may not be ready to jump into a new 'Alias' at this time.

Hopefully, this is a premature idea by ABC that won't leave the launching pad because it's both premature and wrongheaded. Here's three reasons why:

1. That cast will not be duplicated, especially Jennifer Garner: One of the main reasons for the success of 'Alias' was the emergence of Jennifer Garner. She was a hot, new commodity, and there's nothing quite as exciting as a brand new star blasting onto the scene. Jennifer Garner was both gorgeous to look at and watch in action, but she was also a wonderful actress who brought depth to the character of Sydney Bristow.

'Alias' also had an amazing supporting cast, including Bradley Cooper and Michael Vartan, both of whom are leading men now, as well as Victor Garber and Ron Rifkin, who gave the show an air of authority that gave Abrams' fanciful mythology heft and importance. All things considered, ABC will not get that kind of cast again. Lightning doesn't strike twice and the new 'Alias' cast won't measure up to the original.

2. Too many shows have imitated it since: 'Alias' was an original. Oh, yes, there had been shows like it before, like 'La Femme Nikita' or 'The Girl from U.N.C.L.E.,' but nothing quite the same. 'Alias' came across as a fresh take on espionage for television. However, since it premiered in 2001, there have been other shows that are 'Alias'-like. 'Chuck,' for example, follows a normal guy who gets recruited into the spy game. 'Nikita' is coming back as a reboot, too, as much influenced by the Luc Besson film as Abrams' 'Alias.'

And J.J.'s new NBC show, 'Undercovers,' really could be a sequel to 'Alias,' if you picked up the story of married spies Sydney and Michael semi-retired and lured back into active service. When I saw the trailer to 'Undercovers,' 'Alias' came to mind.

3. We need fresh shows, not reboots: The networks and production companies really owe it to the public to stop resurrecting the past and create new programming. It's one thing to give 'Hawaii Five-O' a reboot. That show's been off the air for four decades.

But even if you can buy a new version of that show, it's a lot harder to envision why 'Alias' should be remade five years after it went off the air. Can't the creative folks in show business come up with new programs without leaning on the past so extensively?

Another problem with reboots is that the same issues that fell the original series can occur again. With 'Alias,' the Rambaldi mythology, the time shifts, the multiple personas of the principals ... it all became too much. There's no guarantee that a new 'Alias' wouldn't come up with problems just as gnarly.
Click to expand...

The only way for an Alias remake to work would be a 'How-would-things-have-happened-differently-if Sydney-chose-Will' alternate reality.

Sure, I blame the 'Sydney-dependent-on-Naughn' subplot of ruining the show, but bear with me on how Alias v2 would work.
- YES it would be impossible to gather the same cast, but the main roadblock is that Varty already has a show AND Bradley wouldn't accept supporting actor status. So why not work with those limitations?
- The fun of Alias v2 would be how Sydney's life is different and better in this Alternate Reality.

- If Varty is up for a cameo role, have Sydney reject Naughn shortly after Sydney comes to the CIA. His character can say that he doesn't want to work with a stubborn agent who has Bozo hair. Consistent with Alias v1.
- This opens up the way for Bradley to have Co-star status with Jennifer Garner, since Will would have a major part of Sydney's life.

- If it is possible to get Victor Garber, having him work opposite of Ron Rikfkin is a MUST.
- Get Ron Rifkin's commitment to return as Arvin Sloane. Exploring his past relationship with Jack, Irina and young Sydney is a MUST. Keeping his road to redemption is another MUST-HAVE since it leads to Nadia and then to him striving to be as good a father as Jack is to Sydney. LOST proves that Redemption of a villian such as Ben is possible and effective. Redeeming Sloane is a MUST to have him work along side of Jack.
- Jack and Sloane have different opinions and approaches, but so do many good friends. Their relationship was one of the platforms of the series.
- Get Mia Maestro to return as Nadia - since Alias v2 doesn't have a Naughn, Sydney gets to split her mission partners with Dixon, Weiss, and eventually Nadia. She is the key to Sloane's redemption.
- Keeping Marshall and Weiss would be a bonus.
- Keeping David Anders as Sark is nearly a MUST.

- Since Will would have a major part of Sydney's life, that simple change in reality opens up a way to eliminate the Errors of Alias.

- - Sydney keeps her spy life away from Will and Francie, which enables her to have a home life with her two best friends and an exciting spy life that she needs a break from.
- - Sydney gets to remain the highly intelligent, self-reliant female spy who needs no man's help to get her out of trouble. Though she is self reliant, she will still learn about Jack's unspoken love for her and she will appreciate it.
- - Never waste Jack's role in plotlines and Don't kill him off when the series ends!
- - Never waste Arvin's role in plotlines and Don't kill him off when the series ends! Alias v1 did have the right ideas exploring Sloane's character and his redemption. But the writers fumbled when they decided to kill off Nadia in order to have Sloane revert to evil.
- - With the elimination of the Naughn plotline, that eliminates the Lauren Reed (Melissa George) plotline.
- - If we want, we could delay the plotline of Sydney destroying SD-6, otherwise follow it's destruction. Getting Rutger Hauer and Roger Moore to reprise their roles would be nice.
- - Get Lena Olin's commitment to work long term with Alias v2 or get a different Irina Derevko. I'd prefer to get Sigourney Weaver, plus Victor has worked with her. Sig's probably open to doing a high quality TV show now that her movie career is slowing.
- - Revise Irina's plotline to keep her from devolving into being a self-centered, cold-hearted mother-in-name only kind of villianess. "Things are't as they seem" has to be done effectively!
- - Don't make the mistake of wasting Ron Rifkin. He has a dark past, has moral conflicts, but he is no mere villian. He is a man who had lost his way, but found redemption through his daughter Nadia.

- I wouldn't mind having Rachel Nichols returning as Sydney's protegee at some time, but her movie career seems to prevent that from happening.

What do you guys think of my Alias v2?
You must log in or register to reply here.

T
ALIAS comic in the works

Oct 7, 2005
aliasundercover
A
S
potential spin off allegedly in the works