I recently bought the Alias Complete Series Boxset (God, I love it), and my fanboyishness has got my imagination running rampant. What if there was an ALIAS movie? What would it be like? What must be covered?

Here are some of my ideas:

Sydney is still living with Vaughn, Isabelle, and young Jack in their beachfront home. Between visits from Dixon, Will, and Weiss, Sydney is content with how things are going.

However, a dastardly plan unfolds with Aunt Katya (Isabella Rossolina) and her daughter, Syd's cousin, behind it. Imagine Syd's cousin played by Famke Janssen. Garner and Janssen duking it out, Alias-style! Fanboy-goodness.

Somehow Sark and Peyton could be brought in, too, but I would leave Sloane unearthed.

The whole broohaha could be over young Jack potentially being Rambaldi reborn (a la Full Discosure and the inference that Syd would give birth to Rambaldi). A lot of Rambaldi strings could be cleared up.

Anywho, this is just a fanboy dreaming. What do you think? What would you want?
C

I was thinking more about it, and I realized that Eliza Dushku also looks like a Derevko. To get my point across, I made a quick collage of pics to show similarities shared between current Derevkos and my potential choices (Janssen and Dushku). 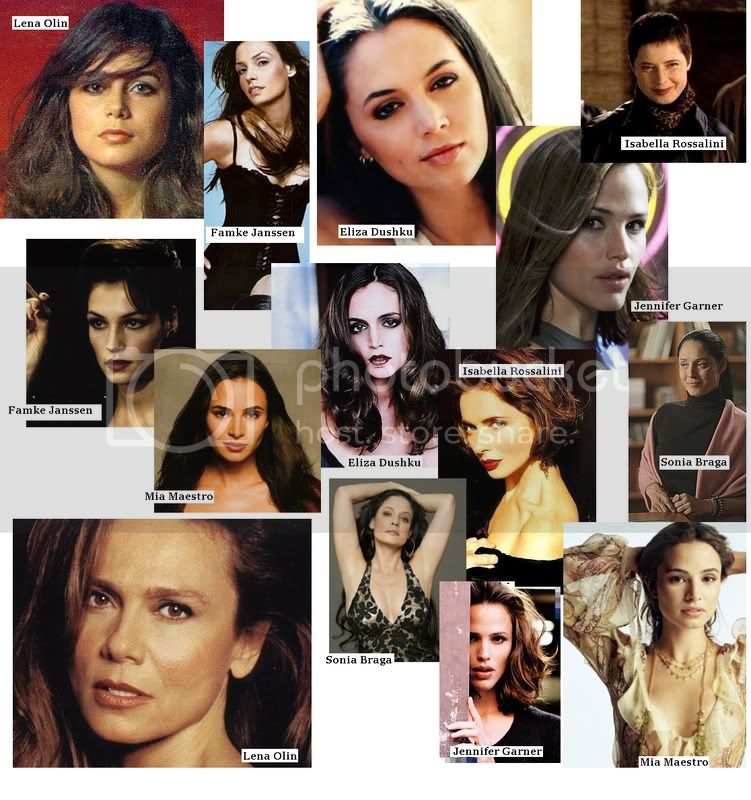 That's a really interesting idea... Jack Jr. is Rambaldi... and I like that Katya and her daughter are behind everyything... that'd be so cool...
S

Wow that picture of Lena top right! She looks so ... different!

I think it would be good to have Syd and Vaughn going on that mission Dixon mentioned, but then while there away something happens... like Sark kidnapps Isabelle - and they have to go get her back. But make sure Weiss is in it this time!!!
P

Syd4Vaughn said:
Wow that picture of Lena top right! She looks so ... different!
Click to expand...

She does look really different.

I'd also really like to see Will be part of Sydney's life again...
C

Good ideas all. But I put a lot of thought into my idea thought. Jack has left a mysterious secret for Sydney to find right before he dies, and Sydney must uncover his secrets by meeting his old contacts and finding old clues and storage facilities. Then maybe in later years to come Isabelle will become an agent too.
P

Anyways, I found this amazing fanmade Fake Alias Movie Trailer on youtube... It basically has Vaughn as a descendent of Rambaldi... and then Isabelle would be the "second coming" of Rambaldi...
U

I honnestly, truly believe that this one day will happen, and when it does I'm literally going to freak out and cry with joy. It would make for such a good movie since Alias had a movie style to it, JJ can direct movies, and we all know Jen can definitley star in them. It's perfect

The fake trailer on youtube was good. Adding Evanescence just made it better .

I think us fans of the show need to somehow demand the movie because I don't think anything will get done unless people know that Alias fans want a movie. I think they should maybe wait a little while till they make it, considering it hasn't been a year yet, and as long as they didn't ruin an already great story then I know for a fact it would be the best movie ever in history

I hope they make this a movie. I know it would be AMAZING. But I it probably won't happen unless we do something.

I read an interview in People and they asked Jen if they were going to make an Alias movie and she said that she honestly didn't think they would unless enough of the fans demanded it.
U

phoenix shotgun 47 said:
I hope they make this a movie. I know it would be AMAZING. But I it probably won't happen unless we do something.

I read an interview in People and they asked Jen if they were going to make an Alias movie and she said that she honestly didn't think they would unless enough of the fans demanded it.
Click to expand...

Yeah, I read that too, and that's why I think we all need to demand it because everyone wants it, right (you'd be crazy not to :blink: )
S

That vid is really cool.

I hope they do make a movie. Certainely all the fans I know are hoping for one.
C

That trailer was amazing, I am hoping that they will make a movie.
I

I just want irina to be alive, thats all I want. If they are making a movie based on the last episode of alias they can say that it was really katya cloned as irina and she's the one that died. An as for jack, the rambaldi juice got all over him so he survived. I just want the spyrents in the movie, if they aren't I don't want a movie.

Do you mean, that's what would've happened after season 5???

The idea of Jack jr being Rambaldi sounds too crazy to me also if there was a movie made I'd prefer seeing the original actors. But besides what I would really like is a TV-series about Jack when he just started his service and the show would start at the moment he met Irina. I think that'd be nice.

If they never make an ALIA movie I'll have to be content with mi:3 which Abrams directed. That seemed to be as close to it as a film's gotten so far.

If Jen and the rest of the cast didn't want to return I'd be up for JJ rebooting it into something else. A young University student who gets recruited at twenty-two and juggles school with her newfound career. She lives at home with her parents and multitasks everything. The main plot is her first couple missions. Could make for an interesting movie.

I don't think I'd be content with an Alias movie without Jennifer Garner and the rest of the Alias movie...JJ Abrams chose to screw up the series and not only they messed up the ending but also didn't leave an open door for a movie.

I'd just want Jen and Mike to star in it, JJ to direct in it, and for them somehow to resurrect Irina and repair her love with Sydney. They didn't need to screw up their relationship in Season 5. WTF. That's my wish.
You must log in or register to reply here.