Go down to the hold and ready a small Canterillian Dragon Stasis Chamber.
Remove all the components so it is an empty shell.
Inside, I want you to place two boxes. One Red and One Blue.
Inside the red box, place a starmap of this region of the galactic arm showing the location of all star tunnel entrances and exits. Include construction plans for building a Class Erpzit craft. Place a primer they can use to decipher our instructions.
Inside the Blue Box, place an orb with DNA dissolving enzyme and instructions in their language stating it is a cure for all disease. Put a trap that activates if the orb is moved that releases the enzyme forcibly to the atmosphere.
In our language, clearly label each box with their contents and function.

Fit one orb star to the chamber hatch. Upon landing, Set the orb star to exit the chamber, leaving the hatch open. Make it take position 2 meters from the chamber and spike itself into the planet. Put two lights on the orb star to simulate eyes. Transmit a repeating message, in their language, of peace and friendship but be sure to include that there is gifts within the chamber for them but warn that they must be opened in the proper sequence. Make sure you include instructions that tell them they should not tamper with anything else.

Set the orb star to fire into the planet if it is disturbed or 3 years after the red box has been opened. The orb star's output will solidify their planet's core. We will let their own star destroy them.

Send the chamber now to their largest city.

[Cue Tiny Voices]
A space ship similar to the ships in the film
*batteries not included (1987)
arrives at our planet and stops at the United Nations.

They make no attempt to make contact but simply fire one tiny rocket.
The rocket bounces off the UN building and falls to the ground.
The tiny space ship then leaves the planet.

Soon there is a faint little pop as the tiny rocket explodes.
A bit of movement around it that gets bigger and bigger as time goes on.

A reaction starts small and grows bigger as it spreads outward and down.

Its a compond that triggers the nuclear bonds of atoms to dissolve.
Similar to the weapon used in
G.I. Joe: The Rise of Cobra (2009)
but not restricted to just metal.

The Earth dissolves later that day leaving nothing but a pile of dust floating in space. 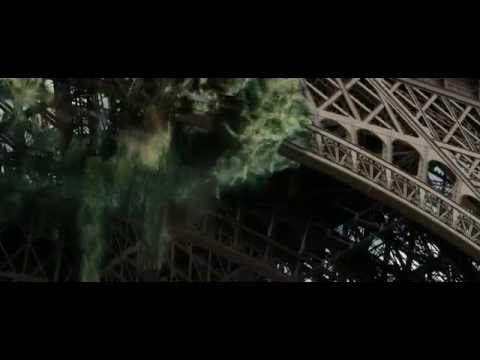 Aw that's dumb, how is that going to kill anyone?

DOOD, Water. The floor of the oceans and lakes comes up and the water has to go someplace...

A
The alien bursting out of the stomache scene in Alien