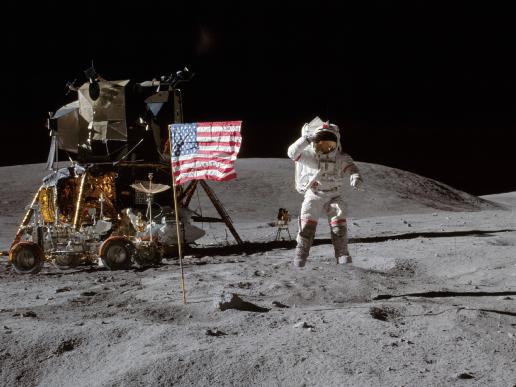 Astronaut John W. Young, commander of the Apollo 16 lunar landing mission, leaps from the lunar surface as he salutes the United States flag at the Descartes landing site during the first Apollo 16 extravehicular activity. Astronaut Charles M. Duke Jr., lunar module pilot, took this picture. The Lunar Module "Orion" is on the left. The Lunar Roving Vehicle is parked beside Orion and the object behind Young (in the shadow of the Lunar Module) is the Far Ultraviolet Camera/Spectrograph. Stone Mountain dominates the background of this lunar scene. Image Credit: NASA (More at NASA Picture Of The Day)