NASA Picture Of The Day
An Infrared View of the Galaxy 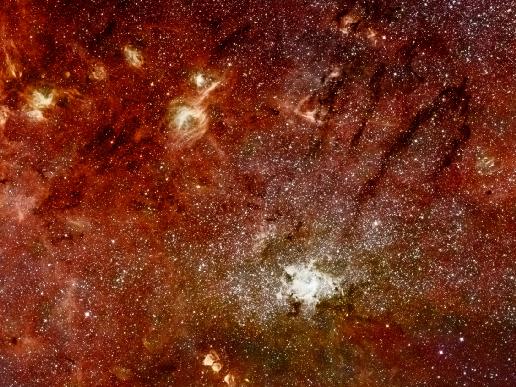 This composite color infrared image of the center of our Milky Way galaxy reveals a new population of massive stars and new details in complex structures in the hot ionized gas swirling around the central 300 light-years. This sweeping panorama is the sharpest infrared picture ever made of the Galactic core and offers a laboratory for how massive stars form and influence their environment in the often violent nuclear regions of other galaxies. This view combines the sharp imaging of the Hubble Space Telescope's Near Infrared Camera and Multi-Object Spectrometer (NICMOS) with color imagery from a previous Spitzer Space Telescope survey done with its Infrared Astronomy Camera (IRAC). The Galactic core is obscured in visible light by intervening dust clouds, but infrared light penetrates the dust. NICMOS shows a large number of these massive stars distributed throughout the region. A new finding is that astronomers now see that the massive stars are not confined to one of the three known clusters of massive stars in the Galactic Center, known as the Central cluster, the Arches cluster, and the Quintuplet cluster. These three clusters are easily seen as tight concentrations of bright, massive stars in the NICMOS image. The distributed stars may have formed in isolation, or they may have originated in clusters that have been disrupted by strong gravitational tidal forces. The winds and radiation from these stars form the complex structures seen in the core, and in some cases, they may be triggering new generations of stars. The NICMOS mosaic required 144 Hubble orbits to make 2,304 science exposures from Feb. 22 and June 5, 2008. Image Credits: Hubble: NASA, ESA, and Q.D. Wang (University of Massachusetts, Amherst); Spitzer: NASA, Jet Propulsion Laboratory, and S. Stolovy (Spitzer Science Center/Caltech) (More at NASA Picture Of The Day)