As fling you Angry Birds towards the green pig defenses do you feel the Force in you? The power? Yes, my young apprentice, anger is power, feel the strength of the Dark Side in you! Um... got carried away there for a minute.

Angry Birds has seen a good number of Star Wars parodies over the years but not there might be an official offering from Rovio coming soon!

On October 8th at 10:00AM Eastern time retailer Toys-R-Us will be making an announcement in Times Square, New York. No details have been released but Rovio, the makers of Angry Birds, have released a teaser image on their Tumblr page and their Twitter account. Originally Rovio posted just the cloaked figure to Twitter but then released an updated version to Tumblr showing the lightsaber!

So far no official word from LucasArts, Rovio, or Toys-R-Us, just some not so subtle hints.

November 8 is the planned release date for Angry Birds Stars Wars! It will be a new stand-alone game and not part of any existing games like Angry Birds Space but it will share the gravity mechanics of that game. The planets of Tatooine and Hoth will both be represented in the new game as well.

The birds will take on the personalities of the Rebel Alliance while the pigs will represent the Empire. The red bird, for example, will represent Luke Skywalker, while there will be pigs that sort of resemble Darth Vader and the Stormtroopers according to Lucasfilm marketing. For the Rebels there will also be representations of Princess Leia, Chewbacca, Han Solo and both R2-D2 & C3-PO will be egg shaped.

Rovio is planning on heavily marketing the game to tie-in with merchandise such as dolls, toys, action figures and misc. other Angry Birds Star Wars related items.

Head over to http://angrybirds.tumblr.com/ for more art work & other graphics from the new game. 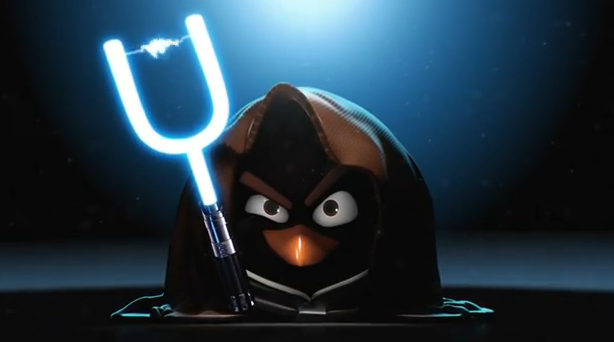 Yes! I will be waiting to load up the game on my new Nexus tablet that day.

My brother got me addicted to playing that video game. I'd play for hours. Four months later, I stopped. I went back to Ghost Recon: Summit Strike and Driver 3 (2 other games that I like replaying - haven't played them in months too).

Well, now I must search for Star Wars Birds and play it until I can't stand it anymore (like J.J.Binks - sorry Fans of J.J.B.).
N

I'm a bit surprised they haven't gone for the Indiana Jones edition of Angry Birds, myself.

astonwest said:
I'm a bit surprised they haven't gone for the Indiana Jones edition of Angry Birds, myself.
Click to expand...

You've just planted the image of that giant rolling rock from Raiders of the Lost Ark being flung by a slingshot towards the green pigs.

New teaser trailers for Angry Birds: Star Wars have been released that shows a bit of the game graphics. The game mechanics based on Angry Birds: Space can be clearly seen. Iconic images & characters from the original Star Wars trilogy can be seen in various scenes.