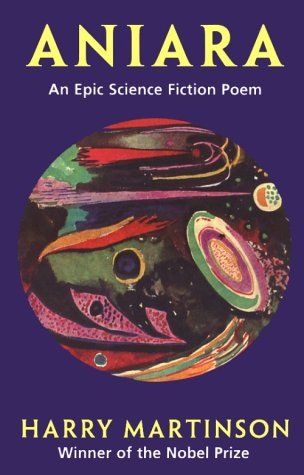 First, let’s start off with an apology and a little explanation. I am not a great fan of poetry. The sum total of my knowledge of it comes from dimly recalled lessons from my high school days, which are now further behind me in time then I care to recall. So when I get into today’s review of a SF poem called Aniara by Swedish poet Harry E. Martinson, it’s pretty much as a pretender that I do so. So when I screw up, please note that it’s not for lack of research (I did plenty for this review, trust me), but probably due to my discomfort with the form.

When it comes to SF, I will freely admit that I am a bit of a snob, and there are sub-categories of speculative literature that I turn my nose up at all the time. Erotica is one. Until very recently another was SF poetry. To begin with, I have never really been that enthusiastic about poetry in the first place. I like to think that I have a vivid imagination, but when it comes to reading someone else's personal emotions and feelings channeled through an artificially metered and rhymed form of writing . . . Well, let's just say that it’s often lost on someone like me. Now, that is not to say that I dislike poetry. I can recall a poem that Jimmy Stewart wrote about his golden retriever. I heard him read it one evening on Carson as I stroked the furry ears of my own golden retriever as he lay upon me, dying of cancer. I was moved to tears. I also remember reading a poem that I read in high school that was about the observations of some vaguely described person, as he or she watched lines of light move around against a dark background. Only after finishing the poem did it occur to me that it was from the point of view of an alien in a spacecraft as he watched rush hour traffic from high above. I wish I could remember the name of that poem. I also enjoyed The Miller’s Tale, in Paradise Lost. I can’t wait to read that one to my son. So no, not by a long-shot do I dislike poetry. But I tend to be very literal – it’s something I get from my mother, and yes, I am working on it – so much of the impact of the words kind of goes over my head, unless the poet is of the mind to stay out of the recesses of his or her own brain, and writes something that has some common meaning in it or uses symbols that I can understand without having to extrapolate meaning from...Please click here, or on the book cover above, to be taken to the complete review..

The Deathworld trilogy, by Harry Harrison