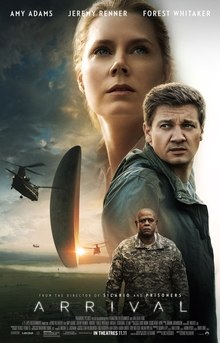 When mysterious spacecraft touch down across the globe, an elite team - lead by expert linguist Louise Banks - are brought together to investigate. As mankind teeters on the verge of global war, Banks and the team race against time for answers - and to find them, she will take a chance that could threaten her life, and quite possibly humanity.

Arrival is an upcoming 2016 American science fiction drama film directed by Denis Villeneuve and written by Eric Heisserer, based on the short story "Story of Your Life" by author Ted Chiang. The film stars Amy Adams, Jeremy Renner, and Forest Whitaker. It will have its world premiere at the Venice Film Festival on September 1, 2016.


Io-9~Comment said:
Well, it’s based on a short story, so if you wanted to just read that it’s not much of a commitment. Also, the rest of that book of short stories is amazing and I can’t recommend it enough!

OK, that aside, let me see what I can do... (without peeking at the wiki article to compare)

The aliens are much less linear. They have round symmetry, so they don’t have a defined “front” or “back”, they just exist at the center of their own perception. That extends to the 4th dimension as well, they don’t think of the day they arrive on earth as “before” the day they leave, they just consider the N days they were here as an un-ordered set of days.

So the scientists are watching these non-linear beings write and trying to decipher letters and sentences, but it turns out it’s more like painting - you can start anywhere, work on pieces in any order, and only the final picture matters.

In figuring this out, the main character starts thinking in terms like the aliens, which extends to thinking about time as not having an important order to it, but just having a sum of events over a particular span. (ie, those youtube things that show 100 panels at once, each showing one minute of a movie.) So she’s simultaneously deciding whether to have a child, while seeing the sum of the child’s life over time.

The artistry of it is that the story uses flashbacks and flashforwards like lots of stories do, but it’s all a double meaning to reinforce the alien philosophy that the order of these events don’t matter. I’m not sure how that translates to the screen. but, again, a great reason to read the original.
Click to expand...


"Story of Your Life"

Author Ted Chiang
Language English
Genre(s) Science fiction short story
Published in Starlight 2
Publication date 1998
​
Finally a compelling science fiction movie with something interesting. Not sure how they will muck it up but the story idea of aliens that look at time differently should be interesting. It kinda makes me think of the wormhole aliens in Star Trek DS9. I love aliens that are depicted as non-human in form and alien societies that hold different value systems than people. If the movie concentrates on the strangeness of the aliens and not the human experience I will like it even more. Something tells me that this movie will be a focus on her perceptions more than the uniqueness of the aliens or their perceptions. Still, the concepts involved are worthy of discussion.

Staff member
When I first saw the teaser trailer it was bugging me what movie it reminded me of. It finally dawned on me.... around 2000 there was a made-for-TV movie named Epoch (also branded as Epoch: Evolution and Torus in some markets). Here's the discussion thread about Epoch.... https://aliensoup.com/threads/epoch.1254.

With similarly shaped alien craft and similar plot points (multiple craft across the globe, countries on brink of war, etc.) I can't help but wonder if there is some connection between the two projects.

There were two Epoch movies. Been awhile since I watched them but I remember liking them. Epoch was a quite well done SciFi Original. The second Epoch movie...Epoch: Evolution was a bastardized SciFi Original sequel.

Epoch had a torus that came out of the Earth and threatened our destruction. It transformed into a sphere and left the Earth. If I recall correctly, there was no communication with the aliens. I liked it because it posed more questions than answers. The mystery made the movie work.

Arrival, from what I can figure, is an alien race visiting us that we find a way to communicate with. The aliens are not interested in destroying us and leave without reason and without conflict. Kinda like just observing us. The info indicates it may not be as much about the aliens as it is about the linguist's sense of time being changed.
I believe the focus will be about Time, not an alien invasion or alien technology. I think most of the movie will be about her life and the life of her daughter and how Time, out of order, affects us.

I absolutely cherished Arrival. The quote that came to me was "Tis better to have loved and lost than never to have loved at all."
I didn't think the aliens would be supporting 'actors', lol, but they were. Louise's decision was the story, imo.

An Accumulation Of Speculation

Arrival is a masterpiece. I love it.