Admit it! The UK has the handle on time travelling series right now, what with Doctor Who, Torchwood, Primeval and of course Life on Mars and now its replacement Ashes to Ashes!

So it is always good to know when the green light has been given to okay entire new seasons of the shows in question. 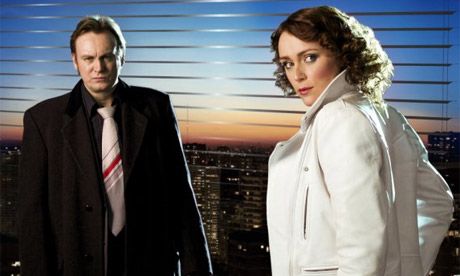 Retro BBC1 police drama Ashes to Ashes will return for a second series next year, the corporation confirmed today.
The 1980s drama, a sequel to Life on Mars, set in 1973, has regularly attracted audiences of about 6 million viewers after the series opener was seen by more than 7 million.
Ashes to Ashes stars Keeley Hawes as psychologist Alex Drake, who is transported back to London in 1981 where she encounters Philip Glenister's no-nonsense detective Gene Hunt.
The programme will return to BBC1 in 2009 after filming on the second series begins in the summer.
Details of the new series are under wraps until the season one finale screens tonight, so it is unclear if Alex Drake remains in 1981 or returns to the present day after her parents die in a car bomb.
"The 1980s have had a real revival over the past few months. Ashes to Ashes seems to have captured the imagination of the nation," said Simon Crawford-Collins, the executive producer and head of drama at Kudos Film and Television, the independent producer that makes the series in association with Monastic Productions.
"I'm sure viewers will be desperate to know who's back in the second series, but for now they'll just have to tune into the last episode of series one to find out."
Julie Gardner, the executive producer for the BBC and BBC Wales head of drama, said she was delighted Ashes to Ashes would return.
"The series epitomises all that is great about BBC drama with its bold, confident storytelling and great characters. I can't wait for more blue eyeliner, [Audi] Quattro cars and 1980s music to burst on to our screens in 2009."

{Kevin makes a mental note to check the BBCA schedule to see if I can program to the DVR to catch it yet.}

Writer
AtA isn't as good as LoM, but it grew on me. The ending of the first series was very well done, I thought. It'll be interesting to see where they take it from here.

TV series: FlashForward, Ashes to Ashes, and The Prisoner

I
Ashes to Ashes