It’s Veterans Day in the USA. It’s the day when we recognize those who have done service in uniform for their country. Unlike other major holidays in America, businesses don’t exploit it, so it’s celebrated with a few small parades here and there, usually in a low-key fashion. If you know any veterans, it would be nice if you would wish them a happy Veterans Day.


Exactly one year has passed since I last posted a Kosmosflot blog. I’ve been on hiatus, and it was intentional. I’ll explain why. Last year I had the pleasure to be invited to Chicago’s great WindyCon science-fiction convention. The theme was military science-fiction, one of my favorite genres, and I was honored to have been invited as a discussion panel participant, a first for me. The subject of the panel was “Building A Military Science-Fiction Library”, and the panelists and I had lots of fun discussing some of the great authors who’ve written about military service of the future.


But at one of the panels, “Who Gets Military Science Fiction Right … Or Wrong”, one of the guest speakers, a well-known author, made an ugly scene when it was mentioned that military ranks have sometimes been filled by people who had gotten into trouble with the law and, well, sometimes were criminals. I already knew this from history and even from personal experience during my days in the Air Force. I didn’t think this was particularly offensive or disrespectful to veterans. Not so with the big-name author. He stomped out of the room, slammed the door behind him, but then returned to launch an ugly tirade at all of us who were in attendance. His rants and raves went on until I was about ready to leave myself, but he finally exited with another loud door slam, not to return. The other panel members had the good graces to (nervously) resume the presentation.


I won’t mention the author’s name. Perhaps he has emotional issues, maybe even related to his own experience in the military. And more than once I’ve read that professional writers can be cranky, moody, and socially challenged. But having to sit through this ugly and disrespectful tantrum really put me off, and though I very much enjoyed the rest of the convention, the untoward experience was in my thoughts during my drive home from Chicago back to Bloomington, Indiana. Finally I decided to take a break, take some time off from science fiction, and pursue other interests for awhile, anyway. And that’s what I did. Though I couldn’t resist buying Bill Keith’s final installment of his 9-volume Heritage/Legacy/Inheritanance military science-fiction epic: Semper Human, written under his penname Ian Douglas. And during the summer I flew out to Pittsburgh to see Bill at the great Confluence convention, a nice break for me while my family was visiting relatives in Armenia. 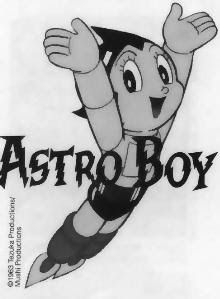 My son and I went to see the new Astro Boy movie, and we both enjoyed it. I will date myself by saying that I actually watched the original Astro Boy tv series, in glorious black-and-white, when I was a kid back in 1963. Of course, the new film makes changes from the original story line. Astro’s father, Doctor Tenma, redeems himself in the new film, unlike the original series in which he was just simply a creep, a bad father. In the skewed world of corporate culture, bad dads are not politically correct, I guess. Not so in Japan. But what I missed the most in the new film was getting a glimpse of the gleaming, tech-wonderful world of the future where Astro Boy lived. In the original series, Earth was indeed a planet of “graphite and glitter”, filled with flying cars, high-speed monorails, undersea cities, and wacky terra-forming projects like a colossal dam across the Bering Straits! Not so in the new film. Like in Wall-E, the new Astro Boy’s Earth is pretty much a garbage heap, polluted, trashed, and awful. And only the elite rich get to live in comfort and safety. Oh well, our expectations and our culture changes, right?


One new pastime that I discovered during my hiatus was Microsoft’s Train Simulator, the world of V-scale model railroading. The V stands for virtual, and, yes, there is even a science-fiction aspect to this hobby which I will show you in a bit. Released in 2002, MSTS, as the program is known, is a virtual-world computer simulation of locomotives, trains, and railroads. With it you can be a train engineer, and simulate the experience of running trains of various types and sizes through routes, simulated rail lines. MSTS is enough of an open system that third parties can create locomotives, rolling stock, and even entire railroad routes, but doing so requires considerable computer and artistic skills. In fact, to really enjoy MSTS and other V-scale software, you must be computer-savvy. Installing software, upgrades, patches, along with debugging and editing configuration files is mandatory, so one must also have computer skills to master this hobby.


There is an amazing library of free add-ons for the program via The Internet. My own collection of downloads now exceeds 67 gigabytes, more than enough that I will ever use in my lifetime, I’m sure. Railfans all over the world have created their own favorite locomotives and routes for MSTS, and though Microsoft shutdown development of MSTS version 2 due to the economic crunch, support for this 7-year-old software program is just amazing, mostly due to its loyal followers.


You can get a look at what MSTS is about by watching some of the great At The Railyard videos on YouTube.


And the science-fiction angle? Well, the first time I ran a train on the Pennsylvania Railroad route, I saw a trackside factory named "Klingon Lawn Furniture Company". And take a look at this James Bond-inspired chase, a very hacked video that showcases the popular fantasy route called Sea View Island. Weapons, explosions, and flying trains are not a part of MSTS. Those were added to the video for fun, but you will see the amazing Sea View Express turbine-powered trains. They’re great fun to run, some of my favorites.


Well, for better or worse, I’m back. A couple of people noticed my absence and were kind enough to write during my hiatus. To them I say, thanks very much for asking about me. This blog amazes me by the large number of readers that keep coming every week, and by their world-wide locations. My most popular posts are the ones about Ded Moroz, the Russian Santa Claus; the War of the Worlds post; and the Science Fiction For Kids entries. So what the heck, maybe I’ll write some more!

Writer
Here is the link to the At The Railyard YouTube video that was omitted in the cross-posting:

Writer
In Osamu Tezuka's original series, Kenma's son, Toby, was killed in an automobile accident while riding in a robot-driven vehicle, not in a weapon experiment. If I remember correctly, the fact that the vehicle was robot-controlled contributed to Kenma's rejection of Astro Boy as a replacement son, since a robot malfunction had actually caused his real son's death. I think in the second TV series this was changed to show that Toby foolishly had taken manual control of the high-speed car, had turned off the robot driver, yet another version of his origin.

Here's the Wiki on Astro Boy