LA Times - Hero Complex said:
Ben Fritz writes for the Business section of the Los Angeles Times and has mad-love for all things geeky, so you'll see his name here at the Hero Complex a lot in the seasons to come. Here's an exceprt from his update on the sales of the hottest video game to ever come out of Gotham City...

Warner Bros. may not have a new Batman movie this year, but the Caped Crusader is turning out to be the biggest thing in Hollywood-licensed video games.

"Batman: Arkham Asylum" sold 593,000 units in August according to NPD Group, which tracks industry sales. It's the biggest first-month sales for any video game this year based on a Hollywood property and particularly impressive given that "Arkham Asylum" was released Aug. 25, meaning NPD only tracked its sales for five days. 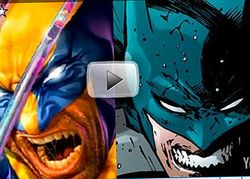 A round up of "Arkham" game reviews

Once you have completed the story line are there still any enemies to fight (I have only seen 2 of the crazed inmates) and is it possible to find the criminals you have beaten in there cells for example the Joker and Harley Quinn...And also on the more unrealistic side is it possible to replay boss fights?

Staff member
I downloaded & tried the demo on the 360 but I couldn't get it it. Guess I'm too old.