Overview: When an old enemy, the Cylons, resurface and obliterate the 12 colonies, the crew of the aged Galactica protect a small civilian fleet - the last of humanity - as they journey toward the fabled 13th colony, Earth. 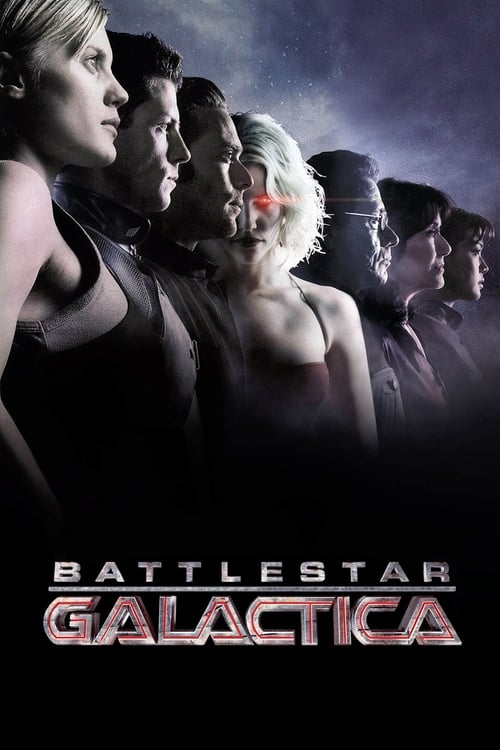 Staff member
The Battlestar Galactica science fiction franchise, which began as a 1978 TV series, was "reimagined" in 2003 into a TV miniseries. The miniseries served as a backdoor pilot for a 2004 TV series. Three seasons of the TV series have been completed and aired, along with a two-part prequel Battlestar Galactica: Razor, which also constitutes a preamble to the fourth season. The fourth season, consisting of 20 additional episodes (excluding Razor which takes up an additional 2 "slots"), began airing on 4 April 2008, and constitutes the finale for the series.

This new Battlestar Galactica is described as reimagined not only to avoid the negative connotations associated with the term remake, but also because it marked an entirely new direction for the franchise, while still based on the original premise; it is analogous to a reboot in comic books.

The new Battlestar Galactica departs from the original in several ways. In terms of style and storytelling, it rejects the traditional televised science fiction styles of Star Trek (after which the original Battlestar Galactica series was conceived) in favor of what executive producer Ronald D. Moore calls "naturalistic science fiction." The new series emphasizes character drama in an edgy survivalist setting and has many of the characteristics of military science fiction, shedding the light-hearted action/adventure style of the original show. Among plot differences, the key characters of Starbuck and Boomer have been recast as female roles. The Cylons are the creation of man and a new breed of Cylon models now imitate humanoid appearance down to the cellular level.
A

I just heard about a revamped Battlestar Galactica mini-series!!!

For more info check out

cool i like battle star galactica and other series like that however it wont be likely that they will be aired here though.
A

The Mini Series was aired on SciFi recently, and now it's being made into a tv series, for SciFi, commercials for the series have already been aired and it's looks amazing.
A

Battlestar Galactica was so awesome! LOVED it. I heard from my dad that the original was bad cuz it was low budget. He had watched that one. But anyway, I'm loving the new series. I hope Boomer won't die. I doubt it. My dad thinks that she'll try to fight the Cylon part of her and be allies with the humans.

I've been seeing ads for this and I REALLY WANT TO WATCH IT!! :spazZ:

I have it recorded on my DVR! It's like Tivo. Now only if you knew me personally and all then you could come over and watch it. But, that's not he case. *sigh*
G

I'm starting to really love this show. Wonder if Boomer is strong enough to fight her programming or will she get homicidal and kill them all when the time comes?
A

I have a feeling Galactica Boomer will turn out to be a 'true' cylon, (ie. let's exterminate humans) but because she is just one of (presumably) many copies she will always be in the show. Plus there's always the possibility that a 'good' Boomer will escape and join the fleet. (ie. Caprica Boomer)
A

Ah I c... that makes a lot sense. Never thought about that. Very true.
I

Im so excited for the next eppy!! Apollo and Adama need ti find their girl(starbuck) It looks really exciting. I loved the last eppy with all the flashback!
A

Oh dude I know! I think that that ep was done very well. And yes! They do need to find Starbuck! I think that's cool that Adama really cares for Starbuck like a daughter. I think that's so sweet. But wow. That was really intense for Starbuck. Having to admit all that to Adama. eeeeeeesh...
D

good god i want to see this show! but i'm going to wait till its on dvd. anybody know when that will be?
V

The season's not even over! No, I haven't heard. :lol:

SiriCerasi said:
I've been seeing ads for this and I REALLY WANT TO WATCH IT!! :spazZ:

I hate not having cable <_<

They showing a previews/ads for it to air on Australian TV Station Channel 10 this Friday and Saturday night.

It looks very good. I love the music they using to advertise it. (They using the song "Spaceman"

Looks very cool with effects and all

alias8000 said:
Battlestar Galactica was so awesome! LOVED it. I heard from my dad that the original was bad cuz it was low budget. He had watched that one. But anyway, I'm loving the new series. I hope Boomer won't die. I doubt it. My dad thinks that she'll try to fight the Cylon part of her and be allies with the humans.

Is that Cylon infiltrator #6 (blonde), a figment of Baltar's imagination or is she brain-linked to him somehow.

If she is real, she helped identify the Cylon device on the bridge and identified the infiltrator man in the pilot episode. Then she'd have her own agenda.
A

Six said she implanted a chip in his brain while he was sleeping that allows her to entre his conscience mind. ( I presume this is the truth, if not, Baltar has A LOT of wacky ideas about the cylons that turn out to be true)

Six definitely has her own agenda, she loves and wants to build a life with Baltar. (scary as that is)
TV show information provided by The Movie Database