Big Trouble in Little China from 1986 with Kurt Russell & Kim Cattrall is without a doubt one of my favorite movies, both as genre movie and as a nostalgia movie (I was 16 when the movie was released). It's a near perfect blend of action, comedy, mysticism, and a bunch of memorable one-liners. It's a movie that I will watch over & over again.

Now there is word that a remake is in the works with Dwayne "The Rock" Johnson in the starring role. Why?! <Angry Shatner>NOT EVERY... MOVIE... NEED TO BE... REMADE!! </Angry Shanter> 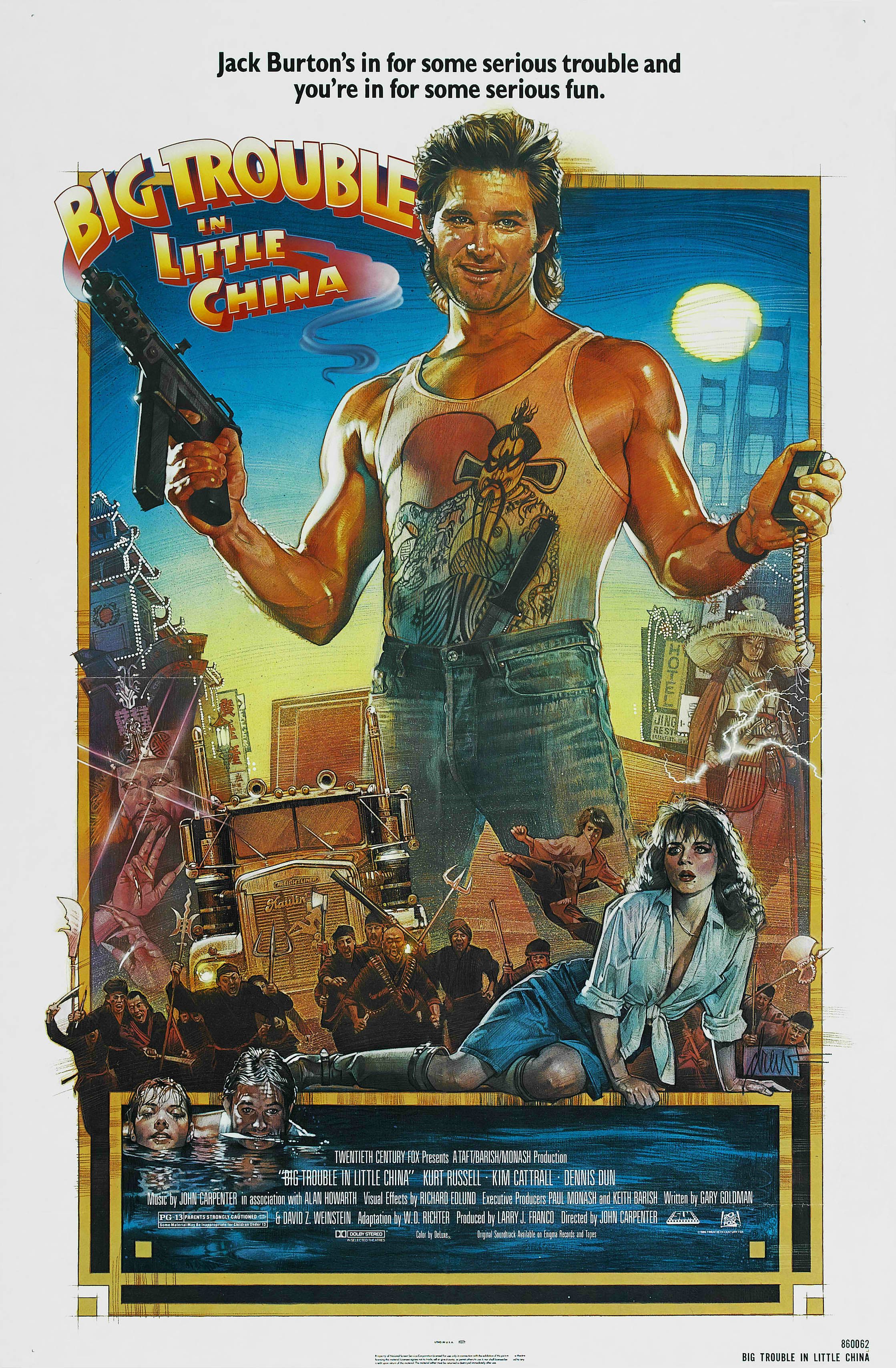 I'm usually not that much against remakes. Why not, can always be fun to see another take at it.

For me, while I like Dwayne and I have seen one or two remakes that weren't that bad, I don't recall ever seeing anything remade that I thought was better than the original, if I really liked the first one.

With Holly~Rock, its always about the money....Always.
They have advisers that look at demographics and slant remakes to the younger - money paying generation that may not have seen the original. Its actually a pretty safe business practice.
The movie already made them tons of money so why not tap the younger generation for more money.

In the past it was sequels, Look at Jerry Lewis or Peter Sellers.
Then it was prequels - capture the same audience with a back story
Now its remakes - new audience plus the old audience wanting to see how they changed it. More money for the industry.

Telling a new story is an unknown investment so it only makes sense to remake the ones that made money before.

Will I see it? Perhaps eventually but I am not going to pay theater prices to propogate more.

Woohoo, Big Trouble in Little China is playing on the big screen at my local Movie Tavern! I love their "Flashback Cinema" showings. This summer has been Jaws, Batman (the original one with Keaton), ST2: Wrath of Khan, Big Trouble, and Top Gun. I resisted all of them, even ST2, but could not pass up the chance of seeing Big Trouble on the big screen!

Turns out Mrs. Kevin has never seen it before! What better way of introducing her to it than by seeing it at a theater.

Kim Catttrall is great no matter what she's in.

I've been watching James Hong literally ALL my life. His career began in 1954 and he is still acting. Over the last 64 years he's appeared in almost every show or movie that required an Asian actor (especially in the 50's & 60's) and always does an outstanding job. He's even been on Big Bang as the Chinese restaurant owner Sheldon drives crazy.

Mrs. Kevin liked this one! I actually think she was disappointed a bit to find out there was never a sequel to it. She wanted to know what happened to Jack and the monster; it amused her to think that the two of them are now travelling around the country in Jack's truck like the old BJ and the Bear TV series.

@Verna, James Hong definitely 'stole the scenes' he was in as old man David Lo Pan in the chair. Watching on the big screen, I think he was having as much fun with the lines as the audience. He really has been in an amazing number of film & TV roles; reading his Wikipedia entry I was surprised to see he was even in a role that I watched as a kid but never realized before, he was #1 Son in the Charlie Chan TV series!

+1. no need to remake
fun film.
IIRC there was a comic series of what happened after. the dragon thing on his truck seen at the end, wasn't following him for revenge, but to follow him as his new master. James Hong has been in EVERYTHING!

Kevin said:
Big Trouble in Little China from 1986 with Kurt Russell & Kim Cattrall is without a doubt one of my favorite movies, both as genre movie and as a nostalgia movie (I was 16 when the movie was released). It's a near perfect blend of action, comedy, mysticism, and a bunch of memorable one-liners. It's a movie that I will watch over & over again.

Now there is word that a remake is in the works with Dwayne "The Rock" Johnson in the starring role. Why?! <Angry Shatner>NOT EVERY... MOVIE... NEED TO BE... REMADE!! </Angry Shanter>

Those gals were pretty nice in the film, and Snake Plyskin was bad to the bone, as far as a remake, dude I agrees with ya' a-men!

By coincidence (or at least since James Hong is in my recent concisousness), Deadline just ran an interview with him.

And, yes, every time I read a quote from him I heard it in his voice.

Kevin said:
Now there is word that a remake is in the works with Dwayne "The Rock" Johnson in the starring role. Why?! <Angry Shatner>NOT EVERY... MOVIE... NEED TO BE... REMADE!! </Angry Shanter>
Click to expand...

Latest info on this is that it won't be a remake of the original but rather a continuation. Well, we all know then that if it is a "continuation" like 2017's version of Jumanji then it's really a soft-reboot of the franchise. I was kind of hoping that this one was going to be dropped, it just won't be the same without the 80's era actors.

From Hiram Garcia who is President of the production company that Dwayne Johnson co-founded)...


“There’s a lot of things going on with [Big Trouble in Little China]. We are in the process of developing that, and let me tell you, the idea is not to actually remake Big Trouble in Little China. You can’t remake a classic like that, so what we’re planning to do is we’re going to continue the story. We’re going to continue the universe of Big Trouble in Little China. Everything that happened in the original exists and is standalone and I think there’s only one person that could ever play Jack Burton, so Dwayne would never try and play that character. So we are just having a lot of fun. We’re actually in a really great space with the story that we’ve cracked. But yeah, no remake. It is a continuation, and we are deep into development on that as well, and I think you’ll start hearing some things about that probably soon.”​
[source]
Share:
Facebook Twitter Reddit Pinterest Tumblr WhatsApp Email Share Link
Top Bottom