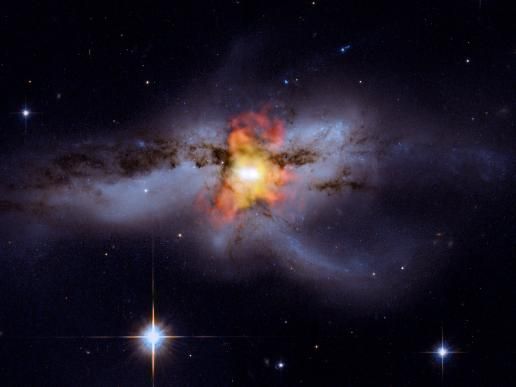 This image of NGC 6240 contains new X-ray data from Chandra (shown in red, orange, and yellow) that has been combined with an optical image from the Hubble Space Telescope originally released in 2008. In 2002, Chandra data led to the discovery of two merging black holes, which are a mere 3,000 light years apart. They are seen as the bright point-like sources in the middle of the image. Scientists think these black holes are in such close proximity because they are in the midst of spiraling toward each other -- a process that began about 30 million years ago. It is estimated that they holes will eventually drift together and merge into a larger black hole some tens or hundreds of millions of years from now. Finding and studying merging black holes has become a very active field of research in astrophysics. Since 2002, there has been intense interest in follow-up observations of NGC 6240, as well as a search for similar systems. Understanding what happens when these exotic objects interact with one another remains an intriguing question for scientists. The formation of multiple systems of supermassive black holes should be common in the universe, since many galaxies undergo collisions and mergers with other galaxies, most of which contain supermassive black holes. It is thought that pairs of massive black holes can explain some of the unusual behavior seen by rapidly growing supermassive black holes, such as the distortion and bending seen in the powerful jets they produce. Also, pairs of massive black holes in the process of merging are expected to be the most powerful sources of gravitational waves in the Universe. Image Credits: X-ray: NASA/CXC/MIT/C.Canizares, M.Nowak; Optical: NASA/STScI (More at NASA Picture Of The Day)

Space A Black Hole Overflows From Galaxy Centaurus A