A new remake of sci-fi series Blake's 7 could soon return to television screens, Sky One has revealed.

The satellite channel has given the green light for the development of two 60-minute scripts for a "potential event series".

Blake's 7, which originally ran on BBC One between 1978 and 1981, followed a gang of rebels fighting an evil federation that ruled the galaxy.

It is not yet known if and when production on the series will begin.

"The time is ripe for a revival of a show that represents the best traditions of the genre, not to mention one of the best-loved and most successful dramas of all time," Elaine Pyke, commissioning editor for drama at Sky One, Two and Three, said.

Sky is working alongside Blake's 7 Productions, a subsidiary of Blake's 7 Media who owns the licence to the show.

The planned new episodes would follow recent re-workings of other sci-fi shows Doctor Who, Battlestar Galactica and Bionic Woman.

The original Blake's 7 series featured Gareth Thomas as lead character Roj Blake and Paul Darrow as cynical-but-charming computer fraudster Kerr Avon. In 2003 Darrow was involved in plans to make a new TV mini-series, but it fell through. 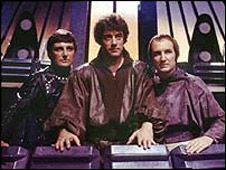 Blake's 7 was known for its shaky sets and basic special effects.

this could be good!

Staff member
Blake's 7 is a good example of a sci-fi show from the UK that shows how the genre is treated there versus the US.

I preferred Mork and Mindy actually Much like 3rd Rock from the Sun warms my heart.
D

Every now and then rummours of Blake's 7 remakes pop up but nothing ever seems to come of it.

I think it would be difficult to replicate the success of the original, mainly because the original team was so good - Terry Nation, Paul Darrow, Jacqueline Pearce & Michael Keating et al all had a key role in making that original show what it was. It would take some acting for anyone to give us a Servalan as deliciously evil as Jacqueline Pearce. & how would you find someone as brilliant as Terry Nation to guide the project?

Staff member
SKY1 dropped their plans for a rebooted TV series of Blake's 7 but there has been a "audio drama" of the series for the past few years with several of the original stars taking part at times.

The on-again-off-again planned reboot of Blake's 7 is, for now, on again. The BBC has announced plans for 13 one-hour episodes to made for the SyFy Channel.


Blake's 7: Classic BBC sci-fi to return on Syfy channel​
​
Cult classic sci-fi series Blake's 7 is to be remade for the Syfy network, it has been announced.​
​
FremantleMedia International said 13 hour-long episodes will be written by Heroes writer Joe Pokaski.​
​
It added, in a statement, that Casino Royale and Goldeneye director Martin Campbell was also on board.​
​
The original series, which ran on the BBC between 1978 and 1981, followed the exploits of a group of renegades and convicted criminals.​
​
Roj Blake, played by Welsh actor Gareth Thomas, was a political dissident arrested, tried and convicted on false charges by a brutal totalitarian government, and then deported from Earth to a prison planet.​
​
Stealing a spaceship, Blake and his team conducted a campaign against the ruling Terran Federation.​
​
Comparing Blake's 7 with the hit US sci-fi series Star Trek, The Independent said in 1998: "No 'boldly going' here: instead, we got the boot stamping on a human face which George Orwell offered as a vision of humanity's future in Nineteen Eighty-Four."​
​
At its peak, the series was watched by 10 million viewers and was sold to 40 countries. A range of Blake's 7 merchandise including books, magazines, annuals and toys were also released.​
​
A radio adaptation, featuring This Life's Daniela Nardini as villain Servalan, was made in 2006.​
​
According to FremantleMedia, the new series will be set in 2136 and will "tell the story of seven criminals - six guilty and one innocent - on their way to life on a prison colony in space, who together wrestle freedom from imprisonment".​
​
It continued: "They acquire an alien ship which gives them a second chance at life and become the most unlikely heroes of their time".​
​
Chief executive officer David Ellender said: "Blake's 7 was such a forward-thinking concept that the show continues to have resonance with audiences today."​
​
The latest announcement is not the first time a remake of Blake's 7 has been attempted.​
​
In 2003, a miniseries was shelved after actor Paul Darrow - who played Kerr Avon in the original show - left the project.​
​
Later in 2008, Sky One announced it had commissioned two 60-minute scripts for a potential series but two years later said it had decided not to proceed.​