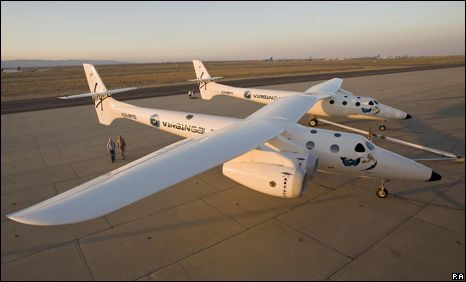 The British business tycoon, Richard Branson, has unveiled an aircraft in the US that will be used for his project to launch tourists into space.
The high-altitude jet will act as the mothership for a spacecraft, releasing it in mid-air to take two crew and six passengers on sub-orbital flights.
More than 250 people have already paid $200,000 (Â£100,000) each to be among the first making the tourist trips.
Mr Branson predicts the maiden space voyage will take place in 18 months.
A crowd of engineers, dignitaries and space enthusiasts gathered inside a hangar in the Mojave Desert in California for the unveiling of White Knight Two "Eve".
'Pioneering spirit'
Virgin Galactic has contracted the innovative aerospace designer Burt Rutan to build its spacecraft at his Scaled Composites factory in California.
But some hurdles remain before Virgin Galactic customers can experience zero gravity.
White Knight Two must undergo a rigorous flight testing programme, beginning in the autumn.
The mothership is a white, four-engine jet designed to cradle SpaceShipTwo under its wing and release it at 50,000 feet (15,240m) in the air.
Once separated, SpaceShipTwo will fire its hybrid rocket and climb some 62 miles (100km) above the Earth.
Engineers still need to finish building SpaceShipTwo, which is now about 70% complete, according to Virgin Galactic.
Mr Branson said the name of the White Knight Two reflected the pioneering spirit of his space tourism venture.
"We are naming it Eve after my mother, Eve Branson, but also because it represents a first and a new beginning, the chance for our ever-growing group of future astronauts and other scientists to see our world in a completely new light," he saidThis article is from the BBC News website. © British Broadcasting Corporation

Space Spicules: Jets on the Sun