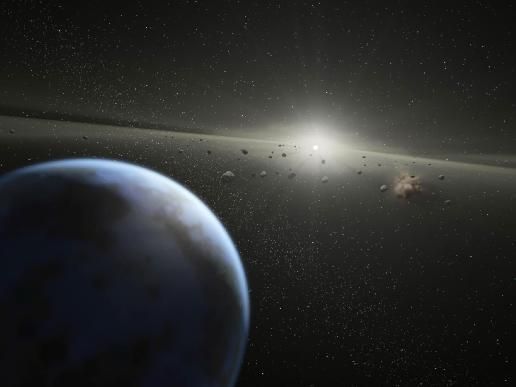 This artist's animation illustrates a massive asteroid belt in orbit around a star the same age and size as our Sun. Asteroids are chunks of rock from "failed" planets, which never managed to coalesce into full-sized planets. Asteroid belts can be thought of as construction sites that accompany the building of rocky planets. Announced on April 28, 2010, scientists using NASA’s Infrared Telescope Facility have detected water-ice and carbon-based organic compounds on the surface of an asteroid. The cold hard facts of the discovery of the frosty mixture on one of the asteroid belt's largest occupants, suggests that some asteroids, along with their celestial brethren, comets, were the water carriers for a primordial Earth. Image credit: NASA/JPL-Caltech (More at NASA Picture Of The Day)

Building a safer space together

Space Building the Next Generation of Spacecraft