Cars set to get parental controls

Cars set to get parental controls 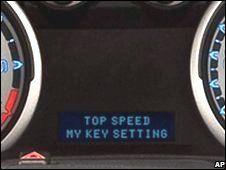 Cars could soon come with parental controls that limit what younger drivers can do with a vehicle.
Developed by Ford, the MyKey system limits a car's top speed, how loud its stereo can be and sounds warnings if seatbelts are not being worn.
Ford will introduce the controls on some US makes of car that are due to debut in 2009 but go on sale in 2010.
The Ford Focus will be the first to have MyKey, but the car maker said it would become a standard feature.
Warning tones
The main element of the MyKey system is to limit the top speed of a car to 80mph.
Ford says other options allow parents to limit the volume on the car stereo and make the car sound a continuous alert if drivers and passengers are not wearing a seatbelt.
Other options will let parents decide if warning tones should sound if a car goes faster than 45, 55 or 65 mph.
The car giant said the system built on the ID chips it already used in car keys to hamper car theft.
"It's making use of existing technology, and through the magic of software, we're able to build features on top of the features we already have," sad Jim Buczkowski, Ford's director of electronic and electrical systems engineering.
Ford's compact version of the Focus, which is due to go on sale in 2010, will be the first to sport MyKey. But a spokesman said it would spread to all cars in the Ford, Lincoln and Mercury range as models are updated.
"Research we've done has shown that speeding is a major factor in teen crashes, especially novice teen drivers," Anne McCartt, senior vice president for research at the US Insurance Institute for Highway Safety, told the AP news agency.
"So I think a system that tries to correct the speeding behaviour has the potential to improve safety," she addedThis article is from the BBC News website. © British Broadcasting Corporation

Staff member
OK, I can see how parents would like this system, as well as some insurance companies, but what is the point of not having the top limit out until 80 MPH?

Seeing as 55 & 65 are the US norms for most states, 80 MPH is well into the area of getting points on the license and not actually help the goal of preventing teens speeding.

Capping cars speeds to a sensible amount is a good idea really. You keep the acceleration but prevent risky driving on the top end. Not saying that uncontrolled acceleration is safe, but why must cars come out for normal drivers with the capability to drive at 125mph? Nobody should be driving at that speed on any road.

As for limiting the car stereo volume, that's a bit extreme really. Personally I fitted my own stereo and had it wired to two amplifiers, decent speakers in the rear, extra tweeters above the front seats and with a subwoofer in the boot, so I'm not the person to talk to about being quiet I liked to come out of clubs, get in my car and still have somewhere approaching the volume in the club since I was already half deafened temporarily!

The beeping for speed grading is interesting. I think all cars should come with preprogrammable systems like that, maybe linked into GPS systems, to warn you when you are going over the speed limit in certain areas. This would take mapping and satellite systems we don't currently have in place or updated correctly. You see, modern cars are so stable that you have the illusion you are going slower than you are and you can frequently find yourself doing 40-45mph in a 30mph zone as a result. It's not just for new drivers, old ones need it too!

US still fighting to control the Internet

Solar Car Mistaken for UFO, Gets Pulled over by Alaskan Police [Solar Power]