Cashback at the tills - hypnotist style

In your daydreams maybe!

Those poor supermarket staff trying to explain away why their tills were down and having no idea what happened! I wonder how many staff have been sacked after he went through their till up until when he got caught on cctv? 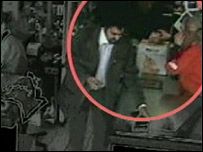 Mesmerising? The 'hypnotist' in action

Police in Italy have issued footage of a man who is suspected of hypnotising supermarket checkout staff to hand over money from their cash registers. In every case, the last thing staff reportedly remember is the thief leaning over and saying: "Look into my eyes", before finding the till empty.
In the latest incident captured on CCTV, he targeted a bank at Ancona in northern Italy, then calmly walked out.
A female bank clerk reportedly handed over nearly 800 euros (£630).
The cashier who was shown the video footage has no memory of the incident, according to Italian media, and only realised what had happened when she saw the money missing.
CCTV from the bank showed her apparently being hypnotised by the man, according to the reports.
Italian police believe the suspect could be of Indian or North African extraction.