CBS has canceled Jericho, according to The Hollywood Reporter. Producers have been told the show is ending its run on the broadcast network, sources told the trade paper.

CBS has canceled Jericho, according to The Hollywood Reporter. Producers have been told the show is ending its run on the broadcast network, sources told the trade paper.

CBS will air the season finale on March 25 with an ending that helps give closure to fans.

After the first season concluded with an abrupt cut to black, fans famously inundated CBS with tens of thousands of pounds of peanuts to urge the network to continue the show. For the seven-episode second season, producers shot two endings: one that leaves viewers in suspense for a third round, another that is more conclusive.

The ending that will air Tuesday night doesn't entirely slam the door on the series, but it is different from the cliffhanger version, sources told The Hollywood Reporter. It also doesn't preclude the possibility of Jericho's finding a second life on cable, though the economics of the production will likely prevent a continuation of the show.

The most recent episodes of Jericho have averaged about a 1.9 rating among adults 18 to 49 on Tuesdays at 10 p.m.

Actually, although the series has premise, the filming and audio was dire! Well, makes me cringe anyhow.

It had the opportunity to become a survivalists handbook. Showing resourcefullness, the reason to keep a society and the changes it would go through. The problems with communication and government, human nature causing problems with bandits and wannabee local Lords.

But it because something more soapy unfortuanately. It isn't the first type of show like this and won't be the last. It is probably misunderstood by a lot of people but has served to stop us getting bored I guess. It just needed more polish.

It his the BBC news today and for a story to reach our main news area and gain a page of its own in this detail means that it is relevant (or the bad weather is slowing down normal stories from developing!)


TV's Jericho is scrapped for good 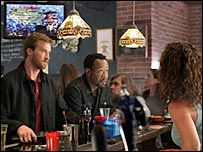 Jericho, the TV drama portraying the aftermath of nuclear attacks on the United States, has been cancelled by CBS, despite viewers' protests. The network said the programme, seen on ITV and Hallmark in the UK, had low ratings despite its "passionate" fans.
Last year some of them sent 40,000lb (18,100kg) of peanuts - a reference to a line of dialogue - to CBS when it announced Jericho was being scrapped.
CBS made more seven episodes, but Tuesday's edition is to be the last.
"Without question, there are passionate viewers watching this programme," said Nina Tassler, the network's entertainment president, in a statement issued to the Associated Press.
"We simply wish there were more," she added. "We have no regrets bringing the show back for a second try." 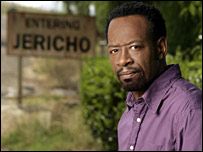 An online campaign led to CBS being deluged by deliveries of peanuts last May.
It was linked to a remark by the character played by Skeet Ulrich at the end of the first series.
Towards the end of that season, Jericho had been attracting about 10.5 million viewers per episode.
But when the first of the seven additional shows was screened in February, its audience fell to some 8.1 million people, dropping further as the run continued.
R

I couldn't afford any more nuts, CBS! WHAT MORE DO YOU WANT FROM ME?!?

Man, they'd better release a good DVD boxset for this, at the very least...

Staff member
I'm just surprised that 8.1 MM is deemed to small of an audience for them to continue it.
E

Kevin said:
I'm just surprised that 8.1 MM is deemed to small of an audience for them to continue it.
Click to expand...


they are always looking for the superhit.