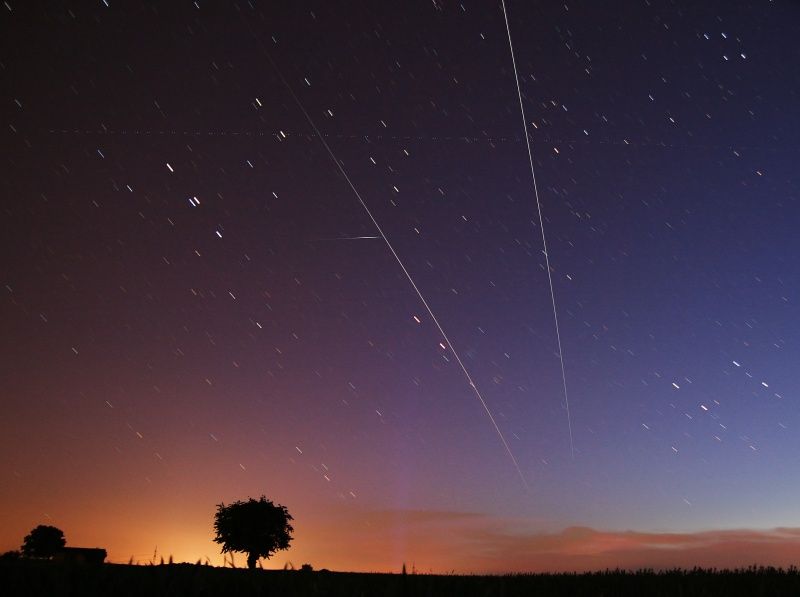 Explanation: Bathed in sunlight, the International Space Station (ISS) arced through the evening sky above the town of Lauffen in southern Germany on May 31st. The timing of the bright passage was about 10 minutes after the launch of the Space Shuttle Discovery on the STS-124 mission from Kennedy Space Center, Florida, in the southeastern US. Of course, Discovery was headed toward an orbital rendezvous with the ISS. In chasing after the space station, the shuttle also made a pass over Lauffen just 21 minutes after launch. With a camera fixed to a tripod, astronomer J&uuml;rgen Michelberger recorded both magnificent machines streaking overhead in two different time exposures, each about 2 minutes long, and merged them in this composite view. Parallax causes the paths of the ISS (right) and Discovery (near center) to seem to diverge as they were at very different altitudes. Stars (and bright planets) leave two, separated, short trails. The brief, flaring track of an Iridium satellite and faint dotted trail of a passing airplane are also visible. A close inspection will reveal a dim reddish track, the jettisoned external fuel tank, just left of Discovery. Placing your cursor over the picture should help identify some of the features.