Staff member
OK, this is something I don't get. As an Amazon Prime member when I purchase a music CD it comes with the MP3 versions for free. Shipping is also free.

So why would the physical CD be cheaper than buying the digital MP3 only option?! Even without the Prime benefits shouldn't physical goods cost at least a bit more than digital goods? 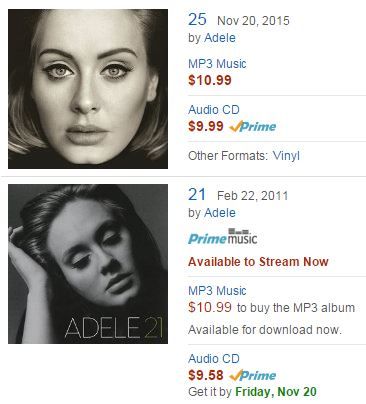 Taking advantage of the Instant Gratification Syndrome of today's consumer

But for Prime customers even then it wouldn't make sense financially because the CD purchase includes being able to download the digital copies as well.

I figure you are correct though for the non-Prime customers. Instead of waiting a bit for the CD to ship, and then likely rip it to MP3 themselves anyway, some customers would be blinded by paying more just for the digital copies instead of having the patience to wait for a package to arrive in mail and also not take into account that having a Prime membership could save money if they purchase a lot of goods.

I don't buy stuff online. I have an aversion to putting my account numbers in a form and hitting ok. For the very few times I have bought something online I buy a prepaid card in the amount and use that. I still pay my bills in person or by check in the mail. Even putting minutes on my phone is done at the AT&T store, in person.

As for waiting to get things I want. I have two savings accounts. One is my monthly expenses buffer that I try to keep at a high enough balance to pay all living expenses for at least 2 months. The other is for saving for things I want so I can pay cash for them. Right now, I am saving for new tires for my truck. Being on fixed income is rough.

Amazon & eBay might be wonderful for getting items you want. I considered opening a pay-pal account but decided against it and confirm my decision everytime I see a news story about accounts being comprimised. I don't have much excess money every month to pay account membership fees and other added expenses.

I have sent pizza to a woman in another state. I used the leftover money on a prepay card to do it. When I finish saving for my tires, I will go pay for them at the store then have them shipped to the store. I bought a mattress for my futon from walmart and I paid for that at the store then picked it up when it got there.

Back in the day, I used to record the radio station to get the music I wanted. I'd fill a cassette then go back and edit out the stuff I didn't want. I did the same with my vcrs for tv and movies. I embraced the new technology and bought CDs and DVDs to update my collections. I spent ungodly amounts of money on stuff I already owned. Now, everything is available on the internet. I pay $62 @ month for more pictures, books, music and movies than I can handle. I even have a MagicJack app on my phone that gives me free phone service when I am in range of my WiFi signal. I put $15 on my andriod phone 3 months ago and I still have $7 of it left.

My son gave me his sign-in for his Dish Anywhere and Netflix accounts. Its nice for having something playing in the background but those recent release titles are old stuff that I see months before. My last.fm account lets me use Spotify to listen to any music I want. I can't even tell you how much money I have saved not buying bad movies or music. As for watching the news and just zoning out to TV, I have sites that stream live channel-casts for that.

Kevin said:
So why would the physical CD be cheaper than buying the digital MP3 only option?! Even without the Prime benefits shouldn't physical goods cost at least a bit more than digital goods?
Click to expand...

Like I said on Twitter it is an Illuminati conspiracy to get humans to be more reliant on computers. If you control the computers you will be able to control the humans.