Tagline: There comes a time to put away childhood things. But some things won't stay put!

Plot: Eight years have passed since the events of the second film. Chucky has been resurrected once again and seeks revenge on Andy, his former owner, who is now a teenager enrolled in military school. 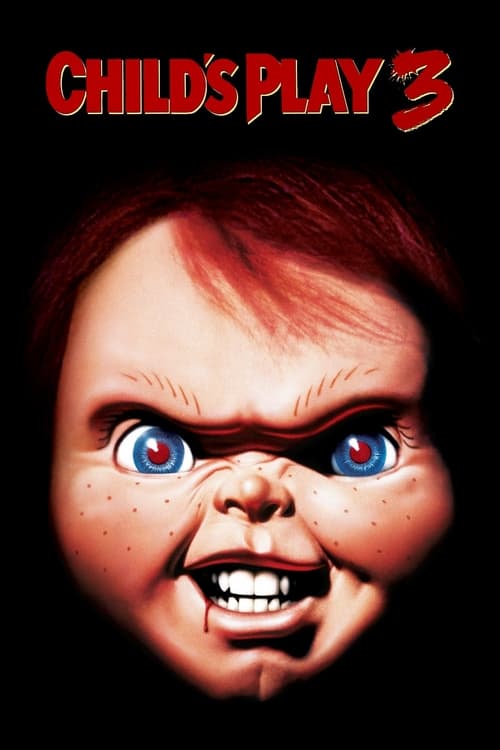 Andy Barclay is now a 16th year old, with fundamental issues caused by his repeated clashes with the psychotic plastic fantastic, naturally when youth goes wrong you send them to a military academy to straighten out their lives. Also attending Kent Military Academy is Tyler, a young black kid with no friends and a father who is a pilot in the air force. Unfortunately for Andy the evil Play Pals Company have resurrected the old Good Guy dolls factory and are working on getting the toys back in stores. Unfortunately they discover the mangled corpse of Chucky and it's into the process for the traumatised toy. Naturally no one notices blood dripping from the plastic wreckage into a vat of boiling plastic. Before you can say "is that a killer toy or are you pleased to meet me" Chucky is back Jack, knocking off a few early victims and discovering Andy's whereabouts via computer.

Chucky manages to post himself in a package to Kent Academy without too many issues, don't ask flipped if I know how that works, and the package is given to Tyler to deliver to Andy. Naturally Tyler discovers a good guy doll inside the package, and naturally goes full adoption route; what's a little larceny amongst friends. Chucky puts two and two together, after Tyler discovers his identity, since Tyler is the first person who has seen his animated self then Tyler is the new host for his soul. Andy soon learns of the plastic fanatic's nefarious plan and works to save Tyler from himself while taking time out for a romantic engagement with Cadet De Silva. A game of cat and mouse ensues with the final confrontation at a local fair ground House of Horrors. Let's saddle up and count the victims Chucky leaves in his wake.

The second movie in the franchise cunningly titled Child's Play 2 made $36 million back in 1990, which was enough to have the studio demanding a third movie, the only problem being what to call it. Naturally after a series of meetings the title Child's Play 3 was decided upon and series creator Don Mancini was tasked with coming up with a script to keep the fans entertained with something new. Result, a movie which pushes Andy prematurely into teenage hood and sends him to a military academy, what could go wrong right. Universal was happy, but unfortunately for the studio fans didn't quite agree with more of the same, which pretty much lead to the franchise falling into the abyss for the next seven years. Our question is just how bad the movie was or was it judged unfairly in the day.

With only a year between releases there is a feeling of things being rushed to cash in on the reasonable good will generated by the second movie. While we have a new location Child's Play 3 throws its toys out of the cot and pretty much repeats what happened in the previous outings. By and large the military academy is under used, there were huge possibilities there, with the same old same old going down. Chucky is still on a mission to transfer his soul, randoms are going to get slaughtered when they stumble blindly into the manic toy's path, and Andy is going to have to battle his arch enemy once again. Anyone else getting slightly tired of this formula, okay it might work for Jason but it doesn't resound with anything like the same force where your antagonist is a child's doll. All in all a slight chore to get through to be honest, but hey who isn't going to fill out their Chucky dance card.

One of the major plot points I didn't buy into was the whole Tyler thing, uhmm didn't the evil CEO run across re-animated Chucky well before the Chuck tried his luck at the Military Academy? Equally movie two kept the Andy mythos running, this movie doesn't, with a slightly mundane explanation thrown onto the table that really fails to keep the logic flowing from the previous movie. All in all the feeling is things are happening because the script requires things to happen rather than the Don keeping to the playbook already established over two movies.

While this is a horror outing and we can expect some out right carnage, hey Chucky says "no hippy chicks", the deaths in Child's Play 3 are somewhat strange. We get prolonged stalk scenes with pretty much random characters that have not been developed in any meaningful fashion. As stated numerous times on this site, if the audience have no sympathy for a character then their fate doesn't matter, we simply don't care. So pretty much the third movie simply adds a body count without having anything meaningful to achieve with it, the Director here displays a singular inability to understand how the horror genre works. And I guess if I had to state the single biggest mistake that is made with the new incarnation of Chucky, it's this point, the preceding two movies thrived on having the plastic fantastic chasing characters we liked, this time around it's more slasher than fun times at the Good Guy doll factory.

Of course not everything is doom and gloom, there are some memorable scenes happening in this movie and a connection, tenuous at best, to a real life murder. Who doesn't remember the Chuckster changing the dummy ammunition to live rounds prior to the war game, and hey that could have been played far heavier, and definitely the final confrontation between Andy and Chucky in the haunted house matches the shenanigans in the Good Guy factory that rounded out the second movie. There was a brief flurry of interest in the UK press surrounding the brutal slaying of James Bulger and a scene in Child's Play 3, this was later proven to be a false assumption, but hey horror motivations right, let's not let the facts get in the way.

Okay this review is probably straining even our most dedicated readers to get through, which should summarise just how disappointed I was in Chucky v3. I mean where has the humour gone? Sure the Chuck might crack the occasional one liner but the overall light hearted approach to murder most foul was simply missing, the movie becomes more of a chore than good times, one you trudge through till the end credits and then have trouble remembering just what happened in it. Thankfully the series stopped after this movie else the dreaded Chucky in Space might have gone down, and no one ever said "hey that would be an awesome idea". Director Jack Bender would appear to be simply going through the motions without having any idea about what made the first two movies fan favourites.

Basically the first two movies in the franchise can be filed under the horror comedy label, while this one seems more mean spirited with some gruesome deaths being injected for I would imagine the gore hound market. Chucky throwing the darts at the CEO of the Good Guy doll company is mere entree to the evil toy's dealing with the Academy barber Sergeant Botnick, who is marvellous played by Andrew Robinson of Hellraiser (1987) fame. The mayhem in the final confrontation is expected but the director doesn't hold back on the nasty when it comes to dishing out the gore, must admit Chucky looks particularly evil after receiving some harsh treatment as he battles Andy for Tyler.

While Child's Play 3 is probably the worse movie in the franchise I sort of enjoyed it on first viewing, subsequent viewings not a preferred option folks, there's no subtle nuances you might miss on the first screening. If you caught the first couple of movies you will no doubt be wanting to dig into this one, don't expect anything as cool as the previous movies however. Not quite sure whether to recommend or not, some folk will enjoy this one but most won't, view at your own discretion would be my call. Not the worse horror movie in the universe but a definite disappointment in terms of this franchise, they should have spent more time on Child's Play 3 rather than rushing it to release.