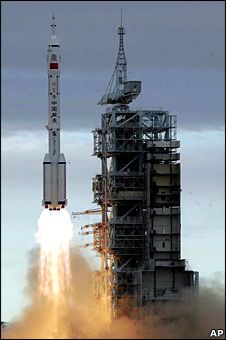 China has announced the names of three astronauts who will carry out its third manned space mission.
A 42-year-old fighter pilot, Zhai Zhigang, has been chosen to perform the country's first spacewalk.
He will be joined by Liu Boming and Jing Haipeng on the Shenzhou VII mission - set to launch on 25 September at 1310 GMT (2110 local time).
State-run news agency Xinhua said the "yuhanguan" (astronauts) were making final preparations for the lift-off.
The spacewalk is scheduled to be broadcast live with cameras inside and outside the spacecraft.
Mr Zhai will undertake the 40-minute manoeuvre outside the Shenzhou VII capsule on the afternoon of either 26 or 27 September, reports say.
As the spacecraft orbits Earth, the 42-year-old, who is married with one son, will enter the vacuum module with one other yuhangyuan.
The other crew member will then help Mr Zhai put on the heavy spacesuit, which is worth about 100 million yuan (Â£8m; $15m), Chinese media reports.
The suit is based largely on Russian designs. But two types of suit, one Chinese-made, the other manufactured in Russia, will be carried up on the spacecraft.
Liu Boming is reported to be the first substitute for the spacewalk.

Satellite surveillance
During the walk, two safety straps will connect the yuhangyuan to the spacecraft.
A small satellite will either be released automatically from the vehicle, or let go by the yuhangyuan during the spacewalk, to beam footage back to Earth.
It is equipped with cameras to capture the historic moment when Mr Zhai steps into space.
China successfully sent its first astronaut, Yang Liwei, into orbit on the Shenzhou V spacecraft in 2003.
Two years later, Fei Junlong and Nie Haisheng completed a five-day flight on Shenzhou VI.
Chinese media reported that this latest mission was the "most critical step" in the country's "three-step" space programme.
These stages are: sending a human into orbit, docking spacecraft together to form a small laboratory and, ultimately, building a large space station.
The Shenzhou VIII and IX missions are expected to help set up a space laboratory complex in 2010.
China launched an unmanned Moon probe last year about one month after rival Japan blasted its own lunar orbiter into space.
Click to expand...