A step forward? Time to see what they come up with I guess.

LONDON, England (CNN) -- A new space race is officially underway, and this one should have the sci-fi geeks salivating. 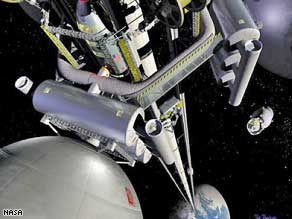 Lift to space: This is a NASA interpretation of what a space elevator may look like.

The project is a "space elevator," and some experts now believe the concept is well within the bounds of possibility -- maybe even within our lifetimes.
A conference discussing developments in space elevator concepts is being held in Japan in November, and hundreds of engineers and scientists from Asia, Europe and the Americas are working to design the only lift that will take you directly to the one hundred-thousandth floor.
Despite these developments, you could be excused for thinking it all sounds a little far-fetched.
Indeed, if successfully built, the space elevator would be an unprecedented feat of human engineering.
A cable anchored to the Earth's surface, reaching tens of thousands of kilometers into space balanced with a counterweight attached at the other end is the basic design for the elevator.
Don't Miss

It is thought that inertia -- the physics theory stating that matter retains its velocity along a straight line so long as it is not acted upon by an external force -- will cause the cable to stay stretched taut, allowing the elevator to sit in geostationary orbit.
The cable would extend into the sky, eventually reaching a satellite docking station orbiting in space.
Engineers hope the elevator will transport people and objects into space, and there have even been suggestions that it could be used to dispose of nuclear waste. Another proposed idea is to use the elevator to place solar panels in space to provide power for homes on Earth.
If it sounds like the stuff of fiction, maybe that's because it once was.
In 1979, Arthur C. Clarke's novel "The Fountains of Paradise" first brought the idea of a space elevator to a mass audience. Charles Sheffield's "The Web Between the Worlds" also featured the building of a space elevator.
But, jump out of the storybooks, fast-forward nearly three decades and Japanese scientists at the Japan Space Elevator Association (JSEA) are working seriously on the space-elevator project.
JSEA spokesman Akira Tsuchida told CNN his organization was working with U.S.-based Spaceward Foundation and a European organization based in Luxembourg, to develop an elevator design.
The Liftport Group in the U.S. is also working on developing a design, and in total it's believed over 300 scientists and engineers are engaged in such work around the globe.
NASA is also holding a $4 million Space Elevator Challenge to encourage designs for a space elevator than can work.
Tsuchida said the technology driving the race to build the first space elevator is the quickly developing material carbon nanotube. It is lightweight and has a tensile strength 180 times stronger than steel cable. Currently, it is the only material with the potential to be strong enough to use to manufacture elevator cable, according to Tsuchida.
"At present we have a tether which is made of carbon nanotube, and has one third or one quarter of the strength required to make a space elevator. We expect that we will have strong enough cable in the 2020s or 2030s," Tsuchida said.
He said the most likely method of powering the elevator would be through the carbon nanotube cable.
So, what are the major logistical issues keeping the space elevator from being anything more than a dream at present?
Massachusetts Institute of Technology (MIT) Aeronautics and Astronautics Professor, Jeff Hoffman, said designing the carbon nanotube appeared to be the biggest obstacle.
"We are now on the verge of having material that has the strength to span the 30,000 km ... but we don't have the ability to make long cable out of the carbon nanotubes at the moment." he said. "Although I'm confident that within a reasonable amount of time we will be able to do this."
Tsuchida said one of the biggest challenges will be acquiring funding to move the projects forward. At present there is no financial backing for the space elevator project and all of JSEA's 100-plus members maintain other jobs to earn a living.
"Because we don't have a material which has enough strength to construct space elevator yet, it is difficult to change people's mind so they believe that it can be real," he said.
Hoffman feels international dialogue needs to be encouaraged on the issue. He said a number of legal considerations also would have to be taken into account.
"This is not something one nation or one company can do. There needs to be a worldwide approach," he said.
Other difficulties for space-elevator projects include how to build the base for the elevator, how to design it, and where to set up the operation.
Tsuchida said some possible locations for an elevator include the South China Sea, western Australia, and the Galapagos Islands in the Pacific Ocean. He said all of those locations usually avoided typhoons, which could pose a threat to the safety of an elevator.
"As the base of space elevator will be located on geosynchronous orbit, [the] space elevator ground station should be located near the Equator," he said.
While JSEA has set a time frame of the 2030s to get a space elevator under construction -- and developments are moving quickly -- Hoffman acknowledges it could be a little further away than that.
"I don't know if it's going to be in our lifetime or if it's 100 or 200 years away, but it's near enough that we can contemplate how it will work."
Building a space elevator is a matter of when, not if, said Hoffman, who believes it will herald a major new period in human history.
"It will be revolutionary for human technology, and not just for space travel. That's why so many people are pursuing it," he said. "This is what it will take to turn humans into a space-bearing species."
Click to expand...

Tim said:
Hoffman feels international dialogue needs to be encouaraged on the issue. He said a number of legal considerations also would have to be taken into account.

"This is not something one nation or one company can do. There needs to be a worldwide approach," he said.
Click to expand...

It is politics that will always doom ideas such as this, not technology.

Let's say for such as moment that all of 'free' countries of the world unite and build such an elevator. The terran station could be in a number of locations but let's assume Australia since it was mentioned as a possible candidate. OK, no problem, everything is peachy, but what happens when 'rogue' countries like North Korea want to play with the new toy? Odds are that even if some proposal is offered to let them use the new elevator, that North Korea and its allies would instead would want to build their own elevator under their control.

So now there are two of these things in a fixed orbit floating around up there with each one under a different alliance control. Does this mean that section of space is now "owned" by that alliance? Or at least permanently controlled by it? I do believe that would break some existing treaties in place today. Would the 'rogue' alliance react in a hostile defensive manner if somebody from the 'free' alliance got to close to their space based elevator? Would the 'free' alliance end up having to fortify their elevator platform to prevent an advancement from the 'rogue' alliance? Would such elevators necessitate the need for the first division of "Space Marines" to be deployed in space?

Not only at the station, but all the way up & around the base.
I believe a Hydrogen powered engine that scoops it up as it goes along (Hanger 13)(Area 51), will arrive first.
It is said building will begin 50 years after people stop laughing ... they're still laughing.
At least at current plans.

I can't help thinking that this would make a "Swell" Lightening Rod ?

Actually, the space elevator thing is a great idea. I think they could build it on a platform in the middle of the ocean to avoid the political angle... it would revolutionize life here on Earth, and truly propel us to the stars.

I to believe that having an easier way to get to space is necessary. The concept is sound, but the idea is ancient.
Once up you will still have to deal with atmosphere/gravity on other worlds. So a series of these (like Stargates) would be necessary.
In other worlds it would solve one problem, but leave many more to overcome.
Perhaps some other idea, Pneumatic tubes in a triple cluster. one up, one down, one for the air to be moved to and from to create the vacuum necessary for propulsion.
When used once (one time pump-out), the movement will create another vacuum for the next journey, operated (started & stopped) by opening & closing seals, and again air pumps.
These could theoretically be manufactured (grown as the previous plan suggests), and much more easily "lowered" into the atmosphere and down to the Earth, than stacking them (sections) up. Once a station is complete. Transportation to other worlds would be a "snap" compared to landing there and building another elevator up.
Again and as well, the same could be created on other worlds. In order to speed up the process of whatever we wish to do on/with/for/to them.
I'm not down on the concept of having a better way to get up & down, just down on the cable/tower/laser/baby-load method.