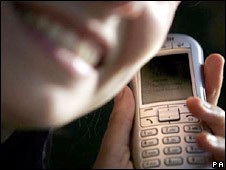 The government's terror watchdog has expressed concern about proposals for a giant database to store details of all phone calls, e-mails and internet use.
Lord Carlile told The Independent the "raw idea" was "awful" and called for tight controls on its use.
And the Lib Dem peer warned "it should not be open season" on collecting data, under the mantle of fighting terror.
Home Secretary Jacqui Smith is due to set out her current thinking about the controversial scheme in a speech later.
Plans to collect more data on people's phone, e-mail and web-browsing habits are expected to be included in the Communications Data Bill, due to be introduced in the Queen's Speech in November.
The government is considering setting up a single database holding all the information, which would include numbers dialled, websites visited and addresses to which e-mails are sent but not the content of e-mails or telephone conversations.
'Unhappy record'
A Home Office spokesman said: "Changes to the way we communicate, due particularly to the internet revolution, will increasingly undermine our current capabilities to obtain communications data - essential for counter-terrorism and the investigation of crime - and use it to protect the public.
"Losing the ability to use this data would have very serious consequences for law enforcement and intelligence gathering in the UK."
But Lord Carlile, the government-appointed reviewer of anti-terror legislation, told The Independent that the government had an "unhappy" record when it came to safeguarding personal data.
"As a raw idea it is awful," he said.
"However, it is a question of degrees and how it is developed. Searches should be made on a case-by-case basis with appropriate reviewing measures so that they can't be done willy-nilly by government."
Clarifying his remarks, he told BBC News he thought the government was "pushing at an open door" with the Data Communications Bill but he warned of the need for strict oversight of any plans, saying "it should not be open season" on collecting data, under the mantle of fighting terrorism.
Lord Carlile said that he would not want Britain to go as far as the Patriot Acts in the US where data searches cover anyone who has made contact with a terrorist suspect.
"There must be codes of practice... In counter-terrorism collation is everything but raw data only has a limited use," he told The Independent.
The Information Commissioner, Richard Thomas, has also warned that such a database could be a "step too far for the British way of life".
'Private lives'
In his annual report, published in July, Mr Thomas called for a full public debate first.
"Do we really want the police, security services and other organs of the state to have access to more and more aspects of our private lives," the report said.
Currently police and intelligence agencies can ask telecommunication providers for information on phone calls made, texts sent and internet sites visited.
The provider can query the request, which might then go to the interception commissioner and another watchdog - but under the new proposals, that right would be removedThis article is from the BBC News website. © British Broadcasting Corporation