Writer
Been a while since I've been by...this year has been a mess, as I figure it has been for everyone.

Some of you might know me through my Aston West novels and novellas (through other threads around here), and the short stories I have in a couple of collections. Finished up another collection of stories, set in the same universe, but focused on a different character who made an appearance in "Entrapment" (one of my Aston stories).

So, head on by and check out my first Kasey Reynolds action pack. Blurb below:

Kasey Reynolds was one of the universe's premiere fugitive apprehension agents. After a particularly troubling failure on what should have been an easy job, Kasey's life and career begin spiraling out of control as she tries to find more work and discover more about what makes her who she is. Follow along on this series of five adventures featuring Kasey as she learns more about herself than she may be willing to admit. 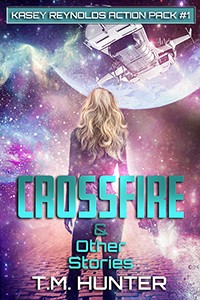 have you had any luck with google books yet? i don't see it listed as a book seller.

luxefaire said:
have you had any luck with google books yet? i don't see it listed as a book seller.
Click to expand...

Doesn't look like Google is one of the stores on the distribution list for Draft2Digital. I'm not sure if it is on their list of future stores to offer or not.

Review of Story of Your Life, and Others, by Ted Chiang

eBooks and Other Online Book Sources

Review: "The Call of Cthulhu and Other Weird Stories” by H.P. Lovecraft (podcast)