I remember reading a book for kids in the early 80's about a time when competitions like the Olympics could be held on other planets, with different gravity and air changing the records we have in place for humans.

But the technology wasn't around to discuss replacement legs, the technology of such being used at this level. Just what classifies you as a Cyborg? The replacement (intentional or not) of your legs? To allow you to run as fast, but for longer, without losing your stamina reserves in sprints like ordinary humans? Do you need a certain percentage of body parts/organs replaced to qualify as a Cyborg?

Looks like the Olympics already had a law in place for the future and one athlete has just been banned from participating for reasons similar to this situation. Should we be calling this 'athlete' a 'Cyborg' and not merely a 'disabled' athlete? Should a man with no legs only be allowed to race in a wheelchair and not with artificial legs?

E-mail this to a friend 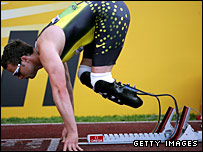 Pistorius had his legs amputated when he was a child

Paralympic 400m star Oscar Pistorius has failed in his bid to compete at this year's Olympic Games in Beijing. The IAAF, athletics' governing body, ruled his prosthetic limbs give him an advantage over able-bodied opponents and contravene rules on technical aids.
A scientific study revealed that Pistorius, nicknamed "Blade Runner", used 25% less energy than able-bodied runners to run at the same speed.
The 21-year-old South African said last week he would appeal against any ban.

Paralympic gold medalist Pistorius training for Beijing
"I feel that it is my responsibility, on behalf of other disabled athletes, to stand firm," he said. "I will appeal [against] this decision at the highest levels, while also continuing with my quest to race in the Paralympic Games and hopefully the Olympic Games."


His agent Peet van Zyl told BBC Sport that he and Pistorius would sit down with their legal team to decide how to take their case forward.
"We are obviously very disappointed," Van Zyl said. "We were really hoping that he would be allowed (to compete).
"The natural feeling from our side is to appeal the verdict. The onus is now on us to prove that he is not getting an advantage."
It is likely that Pistorius will lodge an appeal to the Court of Arbitration for Sport (CAS).
Pistorius, who holds the Paralympic world record of 46.34 seconds, spent two days in Cologne last November undergoing tests alongside five able-bodied athletes of similar ability.
Professor Peter Bruggemann's research concluded an athlete using the "Cheetah prosthetic" could run at the same speed as able-bodied athletes but use less energy.
The tests also revealed that running with prosthetic blades led to less vertical motion combined with 30% less mechanical work for lifting the body.
Based on this and other test results, it was decided the blades should be considered as technical aids in clear contravention of IAAF rules.
Last year, the IAAF banned the use of any device incorporating springs, wheels "or any other element that provides the user with an advantage over another athlete not using such a device".

606: DEBATE
The judgment doesn't seem scientific, fair, or flexible - I hope he has more luck on appeal.


The IAAF's decision means that Pistorius will not be allowed to run in any competitions involving able-bodied athletes.
Last summer he finished second in a 'B' race in 46.90 seconds at the Rome Golden League in July and, two days later, was disqualified for running out of his lane in Sheffield.
Pistorius was 11 months old when his legs were amputated below the knee but only began running competitively on the carbon fibre blades four years ago.
He had immediate success winning the 200m at the Athens Paralympic Games and bronze in the 100m.
The South African also holds Paralympic world records for the 200m (21.58secs) and 100m (10.91secs).
He has come close to times set by able-bodied athletes but has yet to attain the Olympic qualifying time over 400m.
Pistorius's Paralympic world record of 46.34 seconds is also some way off the best able-bodies athletes.
The fastest active athlete is American Jeremy Wariner, whose best time is 43.50secs, while fellow countryman Michael Johnson holds the world record at 43.18.
At last year's BBC Sports Personality of the Year awards, Pistorius won the Helen Rollason Award, given annually to an athlete showing courage in the face of adversity.

Staff member
I caught that story on CNN.com earlier today and had some similar thoughts.

What really had me thinking was if the so-called "blades" could be tuned to artificially hamper their capabilities so that the runner would on par with other runners then would they be allowed? Or even if a totally different type of prosthetics would be approved instead?

I'm sure most of us have either read stories or seen shows where human enhancements can be "tweaked" with different power settings or disabled as needed. I think this runner will be remembered by future generations as the person who started the movement.

What about artifical hearts? If you could increase cell production momentarily to give you added oxygen capability?

Artifical eyes with zoom and ranging capability that help rifle/archery competitions or golfers?


And artifical body parts is only one part of the equation. When gene therapy from conception to birth can interfere with the natural order we'll have more problems than we need, which might end up reducing all physical competitions, maybe even some mental. In the end, LAN gaming competitions on pre-arranged personal computers will be the only competition gaming left without the capability to 'cheat'

They may have to be classed by themselves if their performance is heightened by artificial attachments.

X
Politics "He Shall from Time to Time..."