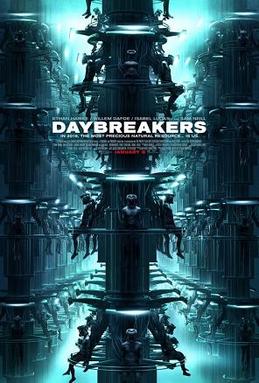 Just got back from the cinema where I watched this scifi horror movie.

It was rated 15 at the cinema here in the UK but I have to say that with all the exploding heads, bodies, swearing and scary/violent scenes it really does belong in the 18+ category.

The story wasn't really original, but the script writer managed to keep down the cliches so that as you sit there waiting for the movie to fall flat, it doesn't. There was even some nice human behaviour in there and I have to say that the script does win over in most of the scenes.

Some of the scenes weren't too good and the ending itself was rather poor. I'm sure when you see it you'll have your own idea in your head of how it should have ended!

Some of the most shocking scenes in the film were actually quiet well timed. If it's a lads night out you're going to be screaming and guffawing at some of them. They were most definitely aimed at the gorefest type of viewer! Maybe the writer/director was subtley trying to keep people in the audience when only within a couple of minutes of opening a somewhat cheap shock trick was pulled on the audience!

Ethan Hawke is quoted as saying that the film is, "low art" and "completely unpretentious and silly" so this does fit in with the gorefest audience scenes I found.

One interior location was perhaps used too much (the subway station) and it made you think about just how many locations they actually used for the whole movie. The budget of $21 million perhaps answers this.

I saw it in a small screening room and tbh I did feel I could have watched it on dvd and not lost much of the value.

The poster outside my cinema suggested the movie was a mix of 28 Days Later and the Matrix, but I'd put it more at The Omega Man and Blade.

Daybreakers - Wikipedia <<-- a lot of the film given away here, be careful how much you read if you are going to see the movie.

The trailers have been pretty cool for this movie. Heard mostly good things from people who have seen it already. Will probably wait for the Blu-Ray though.
J

Looks pretty good, I am looking forward to seeing it. But I agree, I'm waiting for Blu-Ray lol.

i was thinking this was going to be a cross between the matrix and blade, thinking it was going to be a action film, it had action in it but not enough as the trailers made out. i liked it but was disipionted, i'll have to watch it again with no preconceptions i think

I am going to pop this one on to my Rental list.

Staff member
Finally got around to seeing this one. Was... interesting.

Except for a few issues, like there being only 10 years in which society turned from human to vampire, it wasn't bad. Had a few parables in it, like showing the affects of being corrupted by power, overall the story is a bit underwhelming though.