Overview: When heroes alone are not enough ... the world needs legends. Having seen the future, one he will desperately try to prevent from happening, time-traveling rogue Rip Hunter is tasked with assembling a disparate group of both heroes and villains to confront an unstoppable threat — one in which not only is the planet at stake, but all of time itself. Can this ragtag team defeat an immortal threat unlike anything they have ever known? 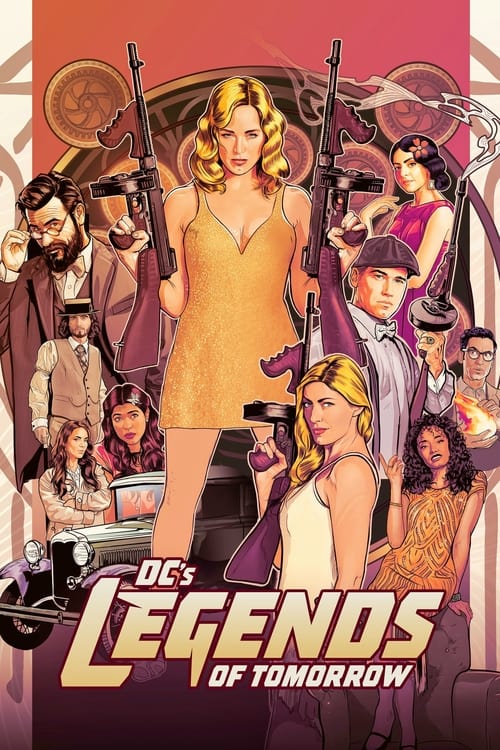 Staff member
A band heroes & villains traveling through time to battle the immortal Vandal Savage who has become rule of the entire world? Yes, please! DC's Legends of Tomorrow, scheduled to premiere Jan 21, 2016, on the CW is a spinoff of The Flash and Arrow and brings several of the characters seen on those shows together united against a common enemy.

OK, first Vandal Savage. Savage started life as a caveman who, in the comics, was exposed to a glowing asteroid. The rest of the cavemen/cavewomen scattered when the asteroid crash to Earth but Savage went straight up to it. The asteroid, or mystery object so it is never found out what exactly was causing it to glow, gives Savage the power of immortality. Savage then spends his time traveling the globe, getting smarter, getting stronger, and quietly gaining power in the shadows of history. Now taking into account the world of comics, the Vandal Savage of the future is even more powerful and time travel is not unknown to him, along with the realms of magic and non-terrestrial objects & beings. In other words, this is an evil guy who is thousands of years old with a vast amount of knowledge & power.

Now if you've been watching both Flash and Arrow the rest of the characters in Legends should be familiar to you.

Ray Palmer is "Atom", the brilliant scientist who bought Queen Enterprises and was dating Felicity. Atom is capable of shrinking in size thanks to an armored suit he created. White Canary is Sara Lance, the original 'Canary' trained by the League of Assassins before dying (and being brought back to life). The role of Black Canary has been taken up by Sara's sister. Captain Cold and Heat Wave are villains who have been a continual thorn to Flash. Captain Cold has shown he can be reasoned with while Heat Wave is chaotic. Firestorm is actually two meta-humans merged together into one physical body. Separately they are they brilliant Dr. Martin Stein and former star athlete Jefferson Jackson (replacing Ronnie Raymond who met an untimely death). When combined as Firestorm they can harness the power of nuclear energy. Hawkgirl and Hawkman are recent additions to the Flash/Arrow TV verse; they both harness the power of flight thanks to giant wings that they can hide from view and they both have incredible strength.

New to the mix of characters is Rip Hunter. Hunter has been in the comics verse for some time but, as of the time of this post, not yet introduced in the Arrow/Flash TV verse. Rip Hunter is a time traveller from the future who comes back in time to assemble a team to travel through time with him to a battle a time travelling Vandal Savage with the goal being of preventing a future Savage from taking over the entire world.

The team that Rip assembles? Heroes & villains who might not be well known today but will on to be known as "legends" to future generations.

That brings us to the first official trailer that has dropped for the show.


OK, Doctor Who fans, did you notice the actor playing Rip Hunter? That's Arthur Devill who of course played Rory (of the Rory & Amy Pond duo) with the 11th Doctor (Matt Smith).

Anybody turn up the volume around the 1:38 mark? That is Savage saying "I've seen 'men of steel' die and 'dark knights' fall." Yep, for the first time Superman and Batman are getting an indirect reference in the DC TV Flash/Arrow verse.

Legends will premiere in January but you really want to watch Flash & Arrow on Dec 1 of this year for when Savage is introduced to the verse which will ultimately lead to Legends.

With the DC TV verse finally getting some cross-show continuity (with the exception of Gotham which is being produced by Fox and not The CW), and the upcoming Batman v Superman: Dawn of Justice introducing Wonder Woman, which will lead to her own movie which in turn will lead to DC's Justice League movie, DC might be finally catching up a little bit to the vast Marvel movie & TV verses.

They've tweaked the origins of Vandal Savage, Hawkgirl, and Hawkman all a bit. The three are all from ancient Egypt but Savage is a royal court adviser and the Thanagarian background of Hawkgirl & Hawkman is non-existent. The Thanagar origin of the Hawk people has been integral to some DC comic story lines in the past, including the Justice League, so whether their origins are fleshed out further in Legends will be something to keep an eye on.

Well have you seen it yet? - IT WORKS!!! - Adult serious sci-fi with good acting, writing and directing.

Funny thing is they say if you like Arrow and The Flash you will like this one - I don't like either
Arrow or The Flash but still find Legends of Tomorrow to be one of the best - good balance between
action, of which there is plenty, and drama. Watch it from the beginning as it is an unfolding story.

Superheroes, time travel, and a super villain to battle - What more can you want?

"In the Future none of you are Heroes - Your Legends"

AlienView said:
Well have you seen it yet? -
Click to expand...

I haven't seen any of them yet!

I missed recording the first on the DVR, couldn't find it airing again, and Verizon FiOS doesn't have CW available for On-Demand. I don't know if it's a FiOS thing with no CW or the network in general. After missing the first episode I watching episodes out of order so now I'm behind entirely.

Kevin said:
I haven't seen any of them yet!
Click to expand...

I'm entirely caught up. Before S2 started they re-aired S1 so I recorded them on the DVR and am now current with viewing.

AlienView said:
Superheroes, time travel, and a super villain to battle - What more can you want?
Click to expand...

FYI from The Flash thread...

Kevin said:
For anybody watching The Flash you'll want to also start watching DC's Legends of Tomorrow if you aren't already! Looks like the main antagonist of the "Flashpoint" TV arc will also be a major S2 antagonist on Legends along with Damien Dark from Arrow.
Click to expand...

On a different note... Legends is going old school with the Justice Society of America (JSA) in S2:E3!

Staff member
If you aren't watching Legends yet, you should be. Of all the current DC live-action shows right now Legends is definitely having the most fun.

The most recent episode worked in The Legion of Doom, George Lucas, Star Wars, Indiana Jones and... the Spear of Destiny! The movie-in-a-show "Legends" had some fun with itself as well by addressing some fan criticisms and McGuffins. They also opened the door a bit for the return of Snart.

Am enjoying this speedster/Malcolm Merlyn/Damian Darhk trio of villians a lot!!!

Staff member
Looks like we'll be seeing a regular cast member leave the show during S3.


Victor Garber, who plays Martin Stein, one half of Firestorm, will be leaving. He is already booked for a Broadway play and the hectic schedule of doing Broadway wouldn't allow him time for Legends.

No official word has been given yet about his departure or whether he'll be making any future appearances in any of the DC verse TV shows.

Kevin said:
Looks like we'll be seeing a regular cast member leave the show during S3.
Click to expand...

With two regular cast members now gone look for Wally West, aka Kid Flash, switch over from The Flash to join the Legends crew full time.

Staff member
Looks like Constantine has gotten positive feedback enough that the character will be added as a regular for S4, assuming that S4 is ordered. The character, played by Matt Ryan, started in the Constantine TV show on NBC based on the long-running DC comic, was cancelled, shows up on Legends with the same actor, has made a few appearances, and is now poised to be added to the cast full time. What along strange trip it's been for the character.

What has happened to this series ?

Up until this season I was really enjoying it.

But now..........Stories seem too childish, like the're directing them to the kids audience

And the stories, IMHO are not very good ether.

Now the stories seem to be all over the place and are more like fantasy stories
instead of the basic sci-fy time travel they were.

What do you think?

AlienView said:
What do you think?
Click to expand...

Yeah, I'm still watching it but this season is so over the top 'campy' that it bears nearly no resemblance to the original premise of the show. I know within the DC verse on The CW that Legends was the one show that didn't take itself too seriously but somebody took it off in the wrong direction to the point where it sort of feels like a parody now.