CBS will be trying again with superheroes, this time with Supergirl premiering on October 26, 2015, in the US.


Twenty-four-year-old Kara Zor-El, who was taken in by the Danvers family when she was 13 after being sent away from Krypton, must learn to embrace her powers after previously hiding them. The Danvers family teaches Kara to be careful with her powers, until she has to reveal them during an unexpected disaster, setting her on her journey of heroism.​
Genre fans might like the casting of Helen Slater as Kara's foster mother. Slater portrayed Supergirl in the 1984 Supergirl movie and will be a "guest" actor as opposed to a regular or recurring. Another guest actor will be Dean Cain as Kara's foster father. Cain played Superman in the Lois & Clark: The New Adventures of Superman TV series that ran on ABC 1993-1997.


Crossovers? Greg Berlanti is the producer of both The Flash and Arrow with both airing on The CW. The CW is owned by CBS so it would seem to be pretty obvious that there'd be some continuity between the shows. But, alas, no, in what is one my biggest grips with the DC Universe shows & movies, the Supergirl series at the moment will be in it's own universe per CBS exec Nina Tassler who has said "those two shows are on a different network. So I think we'll keep Supergirl to ourselves for awhile." In August 2015, Tassler said that while there were no plans at the time to do crossover story lines, the three series would have crossover promotions. So take advantage of the existing DC shows on The CW to advertise a show on the parent network but not bother with story content.

The CW President, Mark Pedowitz has expressed regret at passing up Supergirl while it was still in development. "We hadn’t launched The Flash yet, we weren’t ready to take on another DC property. In hindsight we probably should’ve gone that direction… Sometime you lose great shows."

With ABC, being owned by Disney that now owns Marvel, being the home of Marvel Universe broadcast projects (and Netflix, a Marvel business partner, being the home of Marvel streaming projects), it would've been quite a coup for CBS to have consolidated it's DCU projects under one roof with plenty of crossovers. But, no, yet again we'll get another DC project that shares nothing with the larger DCU family of movies & TV projects. Even in the voice-over of the intro (see video below) Kara says "Earth doesn't have just one hero anymore" implying her cousin, Superman. What they heck, they couldn't even acknowledge the upcoming Batman vs. Superman movie?!
Last edited: Dec 13, 2015

They've introduced Red Tornado on the show. His face seems a bit off. Does anybody remember the neighbor Mr. Darcy from Married With Children? Every scene with a close-up of Red Tornado I couldn't help but think of Mr. Darcy doing a cosplay. 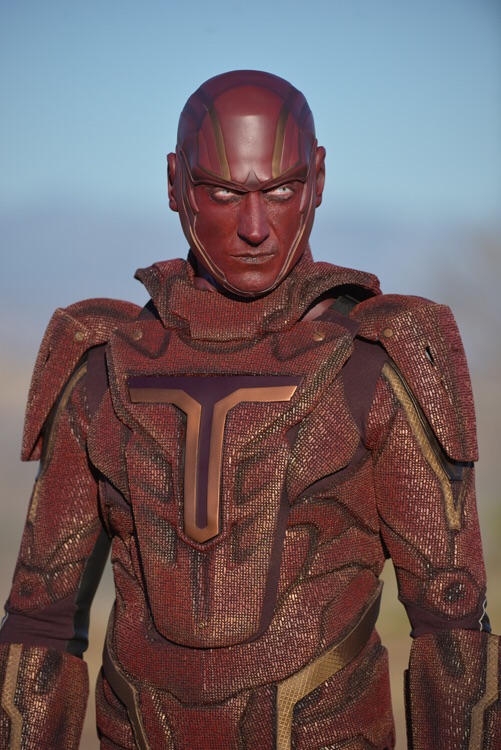 For those recording this on your DVR, take note that the show is moving to The CW when it comes back for S2. The new season, with Superman appearing in S2:E1, will start October 10th at 8PM.

With the show moving to The CW, and joining the other DC shows on The CW (Flash, Legend's of Tomorrow, Arrow) it'll be interesting to see if there are more cross-overs (Flash appeared in S1) and if the show will take on more of a feeling of the rest of the shows or if it'll keep the same "primetime CBS broadcast" look & feel.

Seems like a pretty decent changeover to the new network so far...really haven't lost a beat, other than one of the main character departures. Still enjoying it so far.

Star Trek: TNG alum Brent Spiner (Data) is coming to Supergirl S4. In the past we've already seen Lynda Carter (Wonder Women) as the US President and now Spiner is joining as a recurring guest cast member as the US Vice President. If anybody remembers how S2 ended then you'll know why the role of the VP is going to end up being important once the full ramifications are known.

Kevin said:
Star Trek: TNG alum Brent Spiner (Data) is coming to Supergirl S4. In the past we've already seen Lynda Carter (Wonder Women) as the US President and now Spiner is joining as a recurring guest cast member as the US Vice President. If anybody remembers how S2 ended then you'll know why the role of the VP is going to end up being important once the full ramifications are known.

Things change fast in the world of TV & movies... Spiner has withdrawn from joining the show and instead Bruce Boxleitner (Babylon 5) will be appearing in the role.