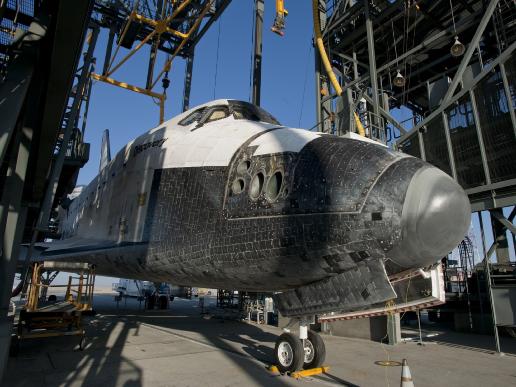 Space shuttle Discovery is parked within the Mate-Demate Device gantry at NASA's Dryden Flight Research Cener prior to beginning turnaround processing for its ferry flight back to the Kennedy Space Center in Florida. Discoloration on Discovery's reinforced carbon-carbon nose cap gives evidence of the extreme heating it encountered during re-entry into the Earth' atmosphere prior to landing on Sept. 11, 2009, at Edwards Air Force Base in California. Image Credit: NASA/Tony Landis (More at NASA Picture Of The Day)

Dust in the Desert

What Are These Weird People Doing In the Arizona Desert? [Vehicles]