Staff member
District 9 is a new film coming out soon by Peter Jackson (of LOTR fame) & Neill Blomkamp that looks into the impact of an incredibly huge UFO that is stranded on Earth, forcing it's occupants to become the newest refugees in the city below. The newly arrived aliens are not exactly greeted with welcome arms and they must eek out a living while being treated as unwelcome second-class citizens. Tensions are high on both sides as the aliens face discrimination in a thinly veiled plot line dealing with racial inequality.

By now you're likely thinking "Uh, wait a minute.... aren't you describing the terrific Alien Nation from the 80's?" Well, yeah, but substitute Johanessburg, South Africa, for Los Angeles & giant insect looking aliens for the close-to-human aliens of Nation and you've got District 9. I guess the guys had a bunch of resources available to them after the aborted Halo movie project and they decided to take advantage of them.


OK, now that we got that out of the way, District 9 is really a big-budget version of Alive in Joburg, a short film by Blomkap in 2005 that is virtually the same story.


Now you could argue that Alive in Joburg is then the child of Alien Nation but there are some notable differences in the two works. The biggest item is that Los Angeles was capable of absorbing a new community within itself while in Johannesburg natural resources are already scarce to begin with. If you can't afford to feed your own family, you won't exactly be happy about a new group of people to compete with. Alive also introduced a different aspect of the story by having multiple UFOs come to Earth with those UFOs remaining hovering over the city instead of the single ship that that crashed in Nation. Not only are the ships still hovering over the city but they have tethers coming out of them that are anchored deep in the ground. What is their purpose? Are they stealing what precious little resources there are in South Africa?

Nation is first & foremost a cop movie, the story of a detective having to overcome his own bias whereas Alive is shot in a documentary style. They may both tell a similar story but Nation explores racial tension as a backdrop while racial tension is the story told in Alive with no pretense.

Alive may be stark but it may be even more telling of our society that UFOs & aliens are needed to get people to pay attention to the story being told.

I want to see this movie. Anyone else?

I love the movie's site because it is so innovative and the movie looks to be very solid based on it.
D

is this movie any good?

It's not out yet. I'm not really sure when the exact date is but I know it's sometime this August.

I hope it will be good. Otherwise I wasted my time on their site.

Oh, I remember seeing something about this on a news item. There was a low budget film released a few years back with the same story, no? Documentary style filming.

Yes, I believe there was. I haven't seen it but I'm sure if a low budget film is good enough to be a full blockbuster; it is worth seeing....I hope.

The LA Times has ran a story giving some more of the background that went into the making of District 9.

One of the things that caught my attention is that District 9 was made with a budget of $30 Million USD, a price tag that barely covers the cost of the talent with most typical Hollywood movies these days. 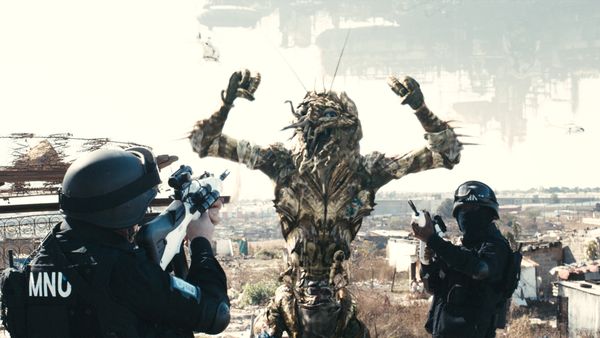 Set in South Africa in the not too distant past, the riveting "District 9" begins nearly three decades after a monstrous spaceship lost power over Johannesburg. There it sits still, suspended over the city like a giant metal thundercloud.

These are stormy days indeed inside District 9, the refugee camp just outside the city built to deal with the huge alien population left stranded by the broken craft. It's one of those "separate but equal" shantytowns reeking of garbage and growing dissatisfaction among the Prawns, which is as good a slur as any for a race of creatures who look like tall, two-legged cockroach/lobsters on steroids.

"District 9" is very smart sci-fi, but that's just the beginning; it's also a scathing social satire hidden inside a terrific action thriller teeming with gross aliens and regrettable inter-species conflict. And it's a blast. . . .

Unemployment is rampant in District 9, healthcare is nonexistent -- unless you count those secret scientific experiments -- and crime is on the rise, helped along by a Nigerian mafia that specializes in guns and ammo. The Prawns spend their days brawling and getting drunk on cat food, which it turns out they have a serious weakness for, sending cat food prices soaring. The locals are fed up and pushing for segregation, again, in South Africa. Don't we ever learn?

Meanwhile, the Prawns just want to go home. They still don't speak English, and humans don't understand much of their synthesized screeches, so what we have here is a failure to communicate (though subtitles help us out.)

The film opens on a drab, workstation-filled floor in what turns out to be headquarters for MNU, the organization well compensated by the world for managing the aliens. A mass resettlement of District 9 is about to get underway, with news cameras rolling and talking heads covering every bit of minutia.

Director Neill Blomkamp, who wrote the screenplay with Terri Tatchell, uses the 24-hour news cycle and its panel of experts to fill out the film's complex back story in a form that feels frighteningly familiar. But as with everything else about "District 9," there's more to it than that... 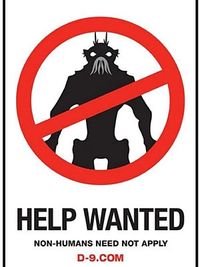 "District 9" and the alienation of apartheid

Peter Jackson: Movie fans are "fed up with the lack of original ideas"

The Lord of the Geeks arrives in San Diego

Jackson: "Hobbit" script is 3-4 weeks away

"The Hobbit" is just the beginning of the del Toro Decade

A travesty: Tolkien heirs made zero off of "Rings" trilogy

Disappointing.
Didn't even try to hide it. Not the slightest bit candid.
Stirring the ashes of old fires to ensure there exists a problem they can preach about.
Yawn.
Pray for "Halo" to save Sci-Fi because this one (as with the day the Earth stood still, and the last "Bond" film), are too busy with globalist, social lectures to be entertaining.
I find calculus & Insurance seminars more exciting.
You'll feel either like your taking a mandatory core credit class, or the guy from Clockwork Orange with his eyes pried open.
Find out for yourselves. I'm done pre-investing false hope in a new classic, or masterpiece.
The first Star Trek was better at it, and the benchmark that has yet to be re-reached.
Enjoy

Watching it in two days, will give my opinion here or on my review page here: Norfilms.com

I have just seen the film and have to say it was a rather good way to spend a few hours. You're overwhelmed into thinking it is a brilliant film as it hits enough buttons to trigger your pleasure centres.

I'd have to watch it again more methodically to break it down into how they filmed it, what traditional elements they've used and what new to figure out if it is all smokescreen and bad realism.

For instance, it seemed like the swearing in it became progressively more common as it went along until it became natural and even necessary. The action scenes were pretty good and could forgive it as such.

The character development of the main character was interesting. Some of the other characters were exagerated, especially in the mercs. The aliens characters varied so much, even changing to suit the scenes, maybe a method to further show predertermination of character in a racial problematic environment in our time, with times where it was showing flashes of almost humanity and suffering.

But for that first viewing in peace, it was rather good and I certainly don't regret it. It is storytelling and entertainment and at that it was very successful. A film that makes the heart pump, mind think and adrenalin flow is always welcome.

Well, I enjoyed the first watching of it yesterday and gave it 9/10 for pure, fast- gritty entertainment.
I'm sure I'll come up with a few new thoughts later, you forget the dark humour in it until long afterwards (Nigerians! ). I@m sure there will be more, but I'll restrict it all to my review page (now posted).

Liked the movie quite a bit. It's amazing what they were able to achieve with a $30 million budget. There were some story/plot holes that seemed a little too convenient but it's still probably the best movie I've seen this year.
G

Writer
Saw it a few days ago myself...personally, I think it was an okay flick, but nothing I'd see a second time (where I had to pay for it).

It was very slow to get into the real heat of the action...and the first 15-30 minutes reminded me of the movie equivalent of a novel's infodump.

Once it started moving, it was a pretty good movie, though there seemed to be several plot holes along the way.

The ending, too, seemed like it was just setting us up for a sequel later. I'm not a big fan of hanging endings, though, so that could just be me.

I'd really like to know what happened to the MC's father-in-law...unless it was there, and I just missed it.

astonwest said:
... Once it started moving, it was a pretty good movie, though there seemed to be several plot holes along the way.

The ending, too, seemed like it was just setting us up for a sequel later. I'm not a big fan of hanging endings, though, so that could just be me.

I'd really like to know what happened to the MC's father-in-law...unless it was there, and I just missed it.
Click to expand...

That'll probably be in the sequel.
S

Saw it and it was okay. I wouldnt watch it tice though. I likes the concept and effects and was amazed the budget was only 30 million when it looked like a 100 million spent. Hello Michael Bay...you listening? hehe. One thing I liked was the story concept of the aliens being cast as refugees.
J

One of my favorite movies of the year so far. Hopefully they put out a sequel soon.

I doubt the original director will do a sequel right away since I think he's working on some other projects but I suppose he could change his mind if they throw enough money his way. They could also get someone else to direct and Neil B. could produce along with Peter J.
T

Hi Friends.
I would definitely like to watch this movie because of its story. I like science fiction based movie a lot, especially Day after Tomorrow. I often read science fiction books in library.