They took the Punisher and made something better of it, but for now he still has He-Man close to his heart

Friday, October 17 2008, 16:48 BST
By Simon Reynolds, Entertainment Reporter
Warner Bros has pulled the plug on Grayskull: Masters Of The Universe, according to Latino Review.

The studio has reportedly lost interest in the project, based around the character of He-Man, after several A-list directors turned down the big budget action movie.

Doug Liman (Jumper) and Bryan Singer (Superman Returns) were both approached but declined to take the director's chair.

The movie lost traction with Warner Bros when executive Navid McIIhargey, who professed to be a fan of the character, departed the studio.

Justin Marks penned the Grayskull script, which Joel Silver was attached to produce.

The 1987 Dolph Lundgren film Masters Of The Universe is the only other live-action interpretation of the He-Man character.
Click to expand...

Staff member
I don't recall the live-action movie at all. Must've slipped under the radar for me.

oh, you missed a delight then. It was hilariously bad.
D

Agreed, I remember seeing it in theaters and wondering what the hell I was watching.

Worth digging up and putting on.

Staff member
Oh, all right... I may have to check to see if NetFlix has this.

Nuts! They have it. Added to my queue.

Hell, they have it at my local library, and Robert Duncan McNeill (tom paris from voyager) is one of the main characters in it.

munky261 said:
Hell, they have it at my local library, and Robert Duncan McNeill (tom paris from voyager) is one of the main characters in it.
Click to expand...

I wonder if he includes it on his current resume.

Writer
Right up there next to the Judge Dredd live-action film?

oho! Looks like they are remaking it after all! 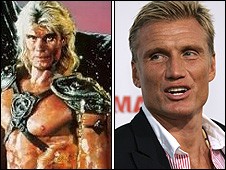 Kung Fu Panda director John Stevenson is to direct Masters of the Universe, a live-action version of the hit 1980s cartoon He-Man, according to reports.
Action film producer Joel Silver will work on the film with Warner Brothers and toy company Mattel, Variety said.
The hero was previously turned into a film in 1987 with Dolph Lungdren as He-Man and Frost/Nixon star Frank Langella as the villainous Skeletor.
He-Man tells of a prince who transforms into a warrior to defend his planet.
The cartoon, also made in partnership with Mattel, was known for the image of blond-haired Prince Adam on top of a mountain uttering the magic words, "by the power of Grayskull, I have the power," and turning into the heroic He-Man.
He-Man and his allies, Battle Cat, Man-at-Arms and Orko defended their planet Eternia from the evil forces of Skeletor, who tried week after week to conquer Castle Grayskull, which gave He-Man his powers.
It is thought the script to the new film will feature more gritty fantasy and re-imagines Adam as a soldier who sets off to find his destiny, happening upon magical world called Eternia.
There, a being called Skeletor raises a technological army and is bent on eradicating all traces of magic.
The 1987 film flopped at the box office and was nominated for a Razzie, the mock awards given to the worst movies of the year.
It is the latest toy to have been given a big-screen outing, following the success of Transformers.
A Transformers sequel is due for release this summer and GI Joe and Hot Wheels films are also to hit cinemas.
Stevenson received an Oscar nomination for Kung Fu Panda, which he co-directed with Mark Osborne.
Click to expand...

Indie 'Grandson of Batman' Movie in the works?