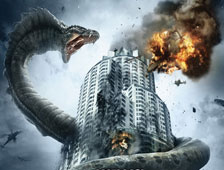 Hancinema reports that a sequel to the monster movie "Dragon Wars" is already in the works and could show up in theaters earlier than expected.

During a news conference at the Korean Cultural Center in New York, comedian-turned-film director Shim Hyung-rae said he has received a proposal to shoot "Dragon Wars 2" very soon, targeting a summer 2009 release date.

The original film, based on the Korean legend, is about unknown creatures that return to devastate the planet. Opening in US on September 14th, the movie went on to take fourth place, by taking $5.04 million. At this point, "Dragon Wars" has earned $8.8 million domestically and $64.4 million worldwide.
I will go see it!

Staff member
I've been seeing commercials for Dragon Wars coming out on DVD so I'll be watching that soon.