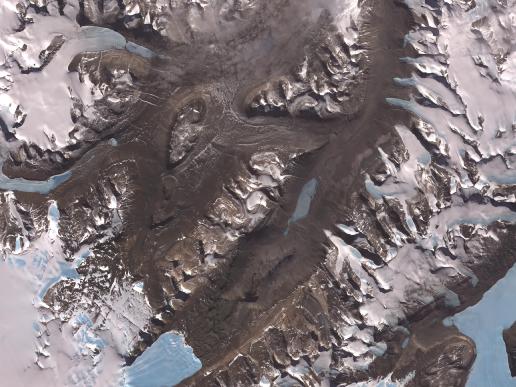 The McMurdo Dry Valleys are a row of valleys west of McMurdo Sound, Antarctica, so named because of their extremely low humidity and lack of snow and ice cover. Photosynthetic bacteria have been found living in the relatively moist interior of rocks. Scientists consider the Dry Valleys to be the closest of any terrestrial environment to Mars. With its 14 spectral bands from the visible to the thermal infrared wavelength region and its high spatial resolution of about 50 to 300 feet, ASTER images Earth to map and monitor the changing surface of our planet. ASTER is one of five Earth-observing instruments launched Dec. 18, 1999, on NASA's Terra satellite. The instrument was built by Japan's Ministry of Economy, Trade and Industry. A joint U.S./Japan science team is responsible for validation and calibration of the instrument and the data products. The broad spectral coverage and high spectral resolution of ASTER provides scientists with critical information for surface mapping and monitoring of dynamic conditions and temporal change. Image Credit: NASA/GSFC/METI/ERSDAC/JAROS, and U.S./Japan ASTER Science Team (More at NASA Picture Of The Day)

Searching for Meteorites in Antarctica