NASA Picture Of The Day
Dunes of Mars 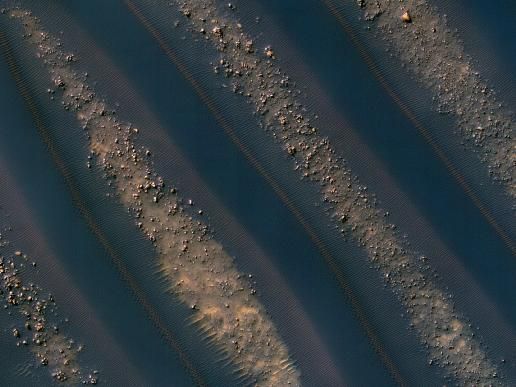 Dunes of sand-sized materials have been trapped on the floors of many Martian craters. This is one example, from a crater in Noachis Terra, west of the giant Hellas impact basin. The High Resolution Imaging Science Experiment (HiRISE) camera on NASA's Mars Reconnaissance Orbiter captured this view on Dec. 28, 2009. The dunes here are linear, thought to be due to shifting wind directions. In places, each dune is remarkably similar to adjacent dunes, including a reddish (or dust colored) band on northeast-facing slopes. Large angular boulders litter the floor between dunes. Image Credit: NASA/JPL-Caltech/University of Arizona (More at NASA Picture Of The Day)

Space Martian Dunes and the Shadow of Opportunity