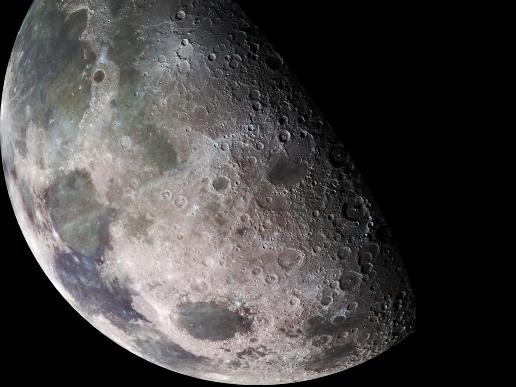 During its mission, the Galileo spacecraft returned a number of images of Earth's only natural satellite. Galileo surveyed the moon on Dec. 7, 1992, on its way to explore the Jupiter system in 1995-1997. This color mosaic was assembled from 18 images taken by Galileo's imaging system through a green filter. On the upperleft is the dark, lava-filled Mare Imbrium, Mare Serenitatis (middle left), Mare Tranquillitatis (lower left), and Mare Crisium, the dark circular feature toward the bottom of the mosaic. Also visible in this view are the dark lava plains of the Marginis and Smythii Basins at the lower right. The Humboldtianum Basin, a 400-mile impact structure partly filled with dark volcanic deposits, is seen at the center of the image. Image Credit: NASA/JPL/USGS (More at NASA Picture Of The Day)

Space From the Moon to the Earth

Fly to the Moon with Google Earth