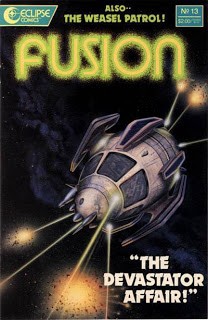 Every Saturday afternoon Ronnie, my six-year-old son, and I attend the kid's matinee at The Cinemat, Bloomington's great DVD-video rental and screening room. Hosted by The Kick, our town's one-and-only superhero sidekick, the classic cartoons and old-time movie serials are fun for both of us, though Ronnie has a tough time choosing his free toy from The Kick's treasure chest of gifts for the kiddos.

After the show we sometimes have a little time to kill before catching the bus home, so we head down the block to Vintage Phoenix, Bloomington's wonderful comic shop, located just off the downtown square. While browsing through the 25-cent back-issue bins, I found a couple of copies of Eclipse Comics' 1987-89 Fusion, a delightful science-fiction/space opera series that on first reading had some similarities to the popular Firefly TV show except with some funny furry characters as part of the crew. 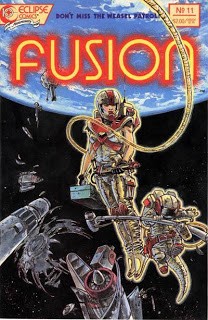 Science-fiction has always been a tough sell for comics, with superheroes, horror, and comedy being the mainstay. Some notable exceptions would be England's Dan Dare, King Features' outstanding 1960s Flash Gordon series, Gold Key's Magnus Robot Fighter, and sci-fi/superhero hybrids like DC's Adam Strange. I've always thought that much of the popularity and success of Marvel's Fantastic Four, Mighty Thor, Iron Man, and other Silver Age comics stemmed from their distinctive science-fiction elements.

It was a nice surprise to discover Fusion, and I hope that in time I can find the other back issues. While my son prefers the latest publications of Transformers: The Animated Series, I am enjoying the space adventures of the Tsunami crew. 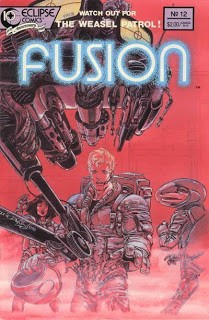 Fusion was a comic book published in 1987 by Eclipse Comics, whose creative team included the writer Steven Barnes, the artists Lela Dowling and Steve Gallacci, conceptual editor Lex Nakashima and many more.

The world of Fusion is centuries in our future, when a series of galactic wars have led to a spiraling arms race between "tekkers and splicers" - that is, between those who take a technological and technocratic route to improving humanity, and those who have abandoned humanity altogether through genetic engineering. The story involves the exploits of a group of space mercenaries in an era when humans who have not been enhanced either genetically or cybernetically, are becoming extremely rare. 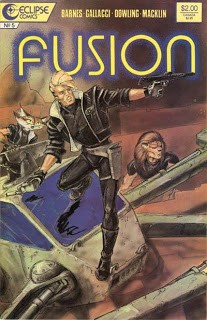 While the comic book also included inserted comics of some variety, such as Dr. Watchstop, the most frequent insert was Weasel Patrol, a comic stemming from doodles drawn of Tan.

Regular characters
The only recurring characters are the crew of the mercenary spaceship Tsunami.

Indio Tremaine: Captain. Human. Born into the Clan of the Three Suns, of which she is the only survivor.
Dow Cook: Synthetic human bio-engineered invulnerable to shock and trauma and with enhanced self-healing ability. Very insecure about himself.
Tan: A musteliform bred from Terran otter stock. Canadian, an alumnus of Labatt's Tech (a fictitious university named after the beer). An alcoholic mechanical and electronics wizard with a severe gambling problem. Never goes anywhere without his 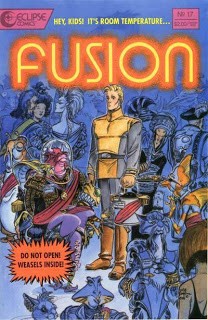 leather pilot cap and goggles.
Beolvoch: A meehook. Something like a dinosaur with feathers. Has an extremely high metabolic rate and thus a voracious appetite for raw meat. Must eat regularly and copiously to stay active. Consequently spends much time in a suspended animation state or complaining that he is hungry. Appears to be a genuine alien species rather than uplifted and genetically engineered earthform.
Alshain: A felinoid; a temperamental and somewhat edgy pilot.
Carz: A leoniform with only one working eye. He is generally a steadying influence, but when he loses it, beware!
Herrick: A hawklike creature, of military caste. Dies very early in the series, in one of many moves which went against formula. Appears in "how we got here" sequences.
Haven: A birdlike creature with well developed nesting instincts. She is a doctor by training.
Eddie: Modelled after some creature with very long ears and a prehensile tail. Likes to hang upside down. A cool dude in shades and khakis or hawaiian shirts. Nothing rattles Eddie. Was a classmate of Tan at Labatt's.