Plot: Major Bill Cage is an officer who has never seen a day of combat when he is unceremoniously demoted and dropped into combat. Cage is killed within minutes, managing to take an alpha alien down with him. He awakens back at the beginning of the same day and is forced to fight and die again... and again - as physical contact with the alien has thrown him into a time loop. 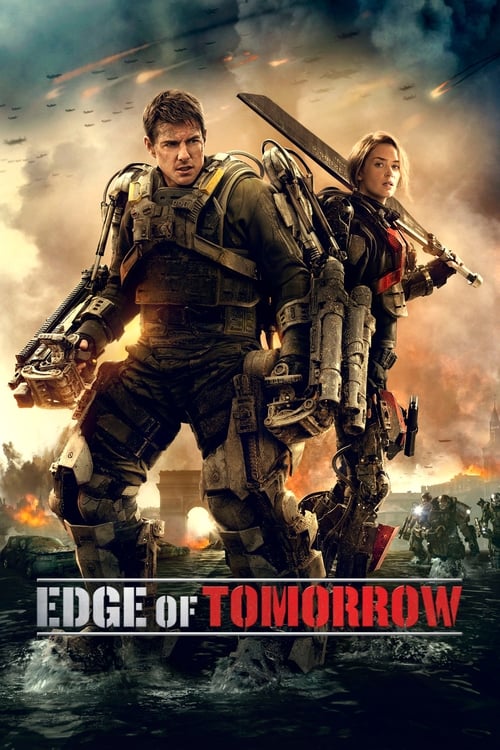 Watched this movie at cinema with friends, and found it pretty ok. Yeah, it's an old stroy with creepy aliens, who came to earth and somehow keep conquering us longer than one or two days. But it's delivered with interesting idea. I'd say, it's like a well known main course, but with new souce, in different serving, and you actualy like it, and even asking for another portion.

First, a warning: this review contains some spoilers, although probably no more than you'd gather from a trailer. If you don't like to know anything before seeing a film, then I'll just say that I recommend this one.

Edge of Tomorrow (also known by the subtitle Live. Die. Repeat.) is set on a near-future Earth which is fighting and losing a war against invading aliens called Mimics; most of Europe has been conquered, except for the British Isles. Major William Cage (Tom Cruise – I know, I know, but don't stop reading!) is an army public relations official with no experience of proper soldiering, let alone combat. He finds himself assigned to the front line of an invasion to retake Europe, launched from England. The invasion runs into an ambush in which the troops are slaughtered; Cage sees a heroine of a previous battle, Sergeant Rita Vrataski (Emily Blunt) killed, and dies himself – but not before he kills a Mimic leader (an Alpha).

He then wakes up, back in England at the point in time at which he was assigned to a combat team, and goes through it all again. He learns that he, as with Vrataski before him, has been caught in a temporal loop caused by their blood being mixed with that of an Alpha, and that he will keep on waking up at the same point each time he is killed. What follows is an endless pattern of slow progress and many deaths (mostly implied rather than shown) as Cage and Vrataski learn the hard way how to survive the battle, escape from the battlefield, and track down the Omega, the alien central intelligence which is controlling the invasion.

Nothing very new in this, you might think, and in a sense you'd be right. The film is based on a 2004 Japanese novel, All You Need Is Kill by Hiroshi Sakurazaka. There are obvious echoes here of Groundhog Day, and even more so of Source Code – the 2011 SF drama which is also reviewed on this blog. Despite this, Edge of Tomorrow takes old ingredients and mixes them to make a fresh and enjoyable film.

The Mimics are very good – frighteningly alien and not remotely humanoid – and the drop ships and combat exoskeletons worn by the troops are realistic, in the sense of resembling some of the designs being developed or proposed now. What makes this film so enjoyable is the combination of a very good script (by a succession of writers), tight direction (by Doug Liman), and great acting, especially by the impressively muscled Blunt as the tough and ruthless combat veteran. The end result is a film which is not only intriguing and gripping but is also very funny, with a thread of deadpan dark humour running through it (mostly from Blunt, who keeps a straight face throughout). It even manages to finish on a grin. About the only point I'd question is the logic behind the conclusion, which I'm still trying to get my head around.

Tom Cruise may not be everyone's favourite actor – he isn't mine – but I have to admit that he does this sort of thing very well, and he deserves some credit for picking interesting SF films, Oblivion being another recent example. If you like a blend of SF ideas, taut military action, and humour (as I do), then Edge of Tomorrow is just about perfect. Enjoy!

Staff member
I have to agree with Tony on this one, it actually wasn't bad.

The technology as shown really could be the future of our own modern armies, with the four-blade tilt-wing aircraft being a future descendant of today's V-22 Osprey aircraft and exo-skeletons are something the US military has already been testing. Unlike a lot of other movies that take place in the future, the tech' is not only possible, but probable so that was cool.

The Mimics were a different take on aliens. The one thing that I kept chuckling about though was that the Mimics reminded me constantly of those 'wacky wall crawlers' that kids play with. Every time a Mimic was shown moving I had an image of a wall crawler slowly making its way down the wall.

As Tony mentions, the ending ends up leaving questions unanswered. For a time travel movie, having only a few unanswered questions is actually a good thing.

I have this movie and it is certainly rewatchable. Tom Cruise movies were never my forte' but I must say his most recent ones have appeal.
I love any movie that portrays aliens as different. No bumpy heads here. The queen/centralized command also reflects a natural order and can be believable with very little dismissal of rationality. Thus the Mimics seem to be possible.
The premise of this movie requires a bit of faith. Faith that it is possible for an advanced culture to manipulate the uncertainty of the quantum Universe. Unlike Groundhog Day (Bill Murry), This movie depicts quantum realities that is manipulable as a function of a device or natural organ. Sliders also had this quality.


Kevin said:
For a time travel movie
Click to expand...

See, I don't think of this as a time travel movie. Tom wasn't really traveling in time. He was switching realities over the repeating time frame. This was more of a dimensional traveling movie for me. Same block of time, different realities.
The Tagline is very misleading: Live. Die. Repeat.
Tom didn't Live. Die. & Repeat. If he did it would have been a boring movie about Tom dying. What made this movie interesting is that Tom retains his knowledge of every reality and is able to change the reality. Thus, the only constant is Tom's consciousness. His reset upon his death does not reset his memory. The concept goes beyond the baseline quantum laws. (Once you observe it, you change it.) Quantum laws would have to be suspended only for Tom's conscience, not his body. The rub is if you consider that anyone's consciousness is created by actual chemical/electric signals in the brain. The brain which is part of the body.
The misconception is that memory is more than mere physical reactions. Otherwise every reset would reset his neurons to their base consistency.

Science fiction that plays with quantum reality is very good. It gives us the ability to comprehend the impact of decisions we constantly make. Our ability to predict, alter and imagine outcomes from our decisions and the ability to change our paths based on those predictions is what sets us apart from the other life on our planet. Movies like this solidify our uniqueness as a species. It is an exercise in humanity. I understand that many people can't or won't make the associations as I do but they are there. Scifi that affirms humanity, explores the unknown and shows unique possibilities is true Science Fiction.

Plus there is lots of action...

Tom said:
See, I don't think of this as a time travel movie. Tom wasn't really traveling in time. He was switching realities over the repeating time frame. This was more of a dimensional traveling movie for me. Same block of time, different realities.
Click to expand...

Thanx for setting me straight. I got so caught up in the different realities and that impact that I completely missed the time traveling aspect. I should have known. Even one moment forward or backward is time travel.
Thanx again, you have given me a chance to ramble on about time travel, lol.

Let's see... We are all time travelers. We progress thru time like moving down a road. If we were not progressing thru time it would actually stop. Time moves faster than the speed of light. Even a photon leaving its source takes time to reach its destination.
We see the past. Light that leaves its source takes time to strike an object, refract or reflect then takes even more time to reach our eyes, be captured and processed. What we see as real-time is actually past-time.
I wonder if any science has actually made any measurements of the speed of time? That makes me wonder how/what they measure it against? I wonder what the effects of moving at the same speed as time would be? I doubt it would resemble light speed. I guess the bubble around the time machine is vital inside as well as outside.
With a little speculation I think traveling at the speed of time would be instantaneous no matter the distance. Sorta like a quantum observation. It would be traveling with no duration, no duration at all.
I suspect that time speed is also unmutable. It does not fluctuate like light speed. It matters not whether it is in a vacuum or thru iron, the speed remains the same.
Now, my thoughts are to gravity and time. Can the flow of time be bent? Light gets bent by gravity. Does time? Which is stronger, gravity or time? It's theorized that gravity has a particle called a gravitron. Is there a particle associated with time? A timeitron or something?
Damn Kevin, See what you did to me! Now I can look forward to some sleepless nights while I try to fathom deeper realities. I don't even have the luxury of any webpages to explore to quantify my speculation. Knowing me, Not only will I be racking my brain to find something that works, I will need to come up with devices based on the timeitron that would have practical applications like a gravity sled for the gravitron.
Argh! Tylenol here we come!

The sequel is happening! No word yet if Tom Cruise or Emily Blunt are returning, though they are expected to, for the still as of yet untitled movie. So far the only confirmed attachment to the project is Matthew Robinson who was a writer on The Invention of Lying.

Xiggy said:
The sequel is happening!
Click to expand...

Maybe, may not. I haven't seen anything about a movie sequel since last year but earlier this year I caught that there was a proposed TV series spinoff planned. While I'd be all for a big budget TV adaption, that also might not happen because of a lawsuit between Warner Bros and Village Roadshow Films who co-financed the movie. Even more troubling, the series would've been for HBO Max who has since cancelled a ton of shows, stopped several shows that were in production or planned, and are changing the direction they want to take with their streaming projects.