Fantasy Empires of the Deep

Empires of the Deep is a film still in production that is being financed by Jon Jiang, a Chinese real estate tycoon. Starring Olga Kurylenko, known to movie fans by her appearances in the James Bond flick Quantum of Solace & to gamers by her appearance in May Payne, the movie has been in post-production for over two years with no firm release date announced. With a budget reportedly topping $130 million USD the movie is poised to be one of the most expense Chinese produced movies.
Last edited: Sep 20, 2015

Set in a mythical world, the story of an unlikely love story between a young human and a mermaid.


Empires of the Deep 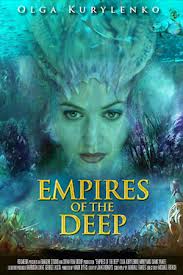 still no release info. looks like direct-to-cable. very hard for foriegn films to get much theater exposure in US.

Still no release date, even in China. A 2014 date is listed for the Chinese market so if it does ever get released there domestically I'm sure it won't be too much longer after that it will show up for streaming & cable.

Following up on this one, the Chinese release date is now December of 2015. If it gets released it'll mark nearly five years of post-production work.