NASA Picture Of The Day
Endeavour Lifts Off 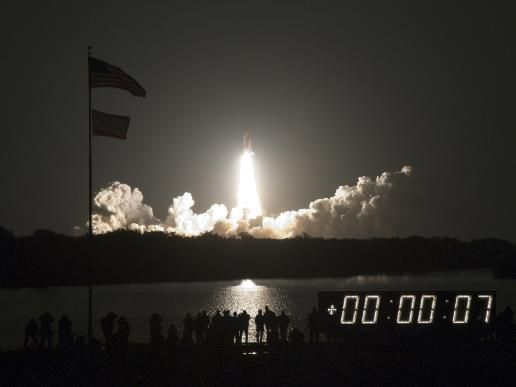 Space shuttle Endeavour lights up the night sky as it lifts off from Launch Pad 39A at NASA's Kennedy Space Center in Florida. The primary payload for the STS-130 mission to the International Space Station is the Tranquility node, a pressurized module that will provide additional room for crew members and many of the station's life support and environmental control systems. Attached to one end of Tranquility is a cupola, a unique work area with six windows on its sides and one on top. The cupola resembles a circular bay window and will provide a vastly improved view of the station's exterior. The multi-directional view will allow the crew to monitor spacewalks and docking operations, as well as provide a spectacular view of Earth and other celestial objects. The module was built in Turin, Italy, by Thales Alenia Space for the European Space Agency. Image Credit: NASA/Jim Grossmann (More at NASA Picture Of The Day)