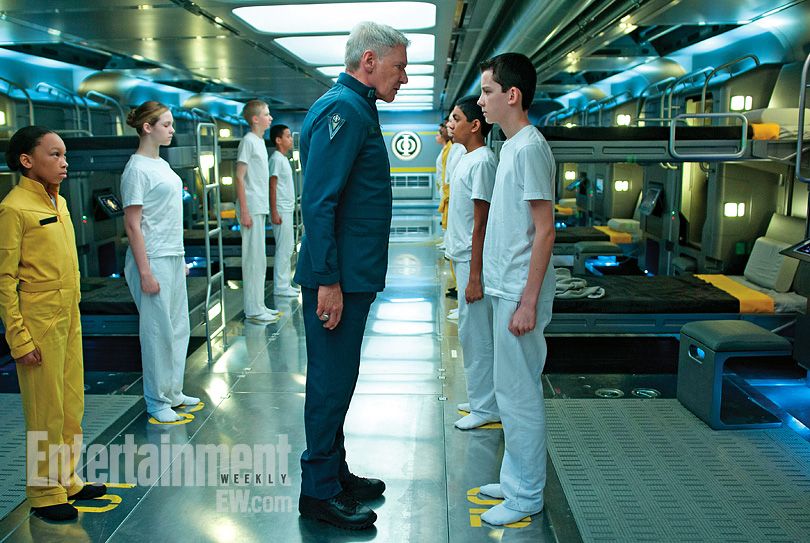 A single still is released into the wild!

Writer
Having just read the book a few months ago, I'm interested in seeing this one...but that picture is odd, since weren't the kids in the book not wearing clothes?

man, i read this book a looonnngg time ago, i liked it (i also liked enders shadow i think it was called, the book about bean), im still curious how are they gonna do the battles at the school

Any more news on when this might be released? I enjoyed the books a great deal.

Broncoi said:
im still curious how are they gonna do the battles at the school
Click to expand...

CGI and lots of harnesses, is my guess.

The first trailer for Ender's Game has been released. The scheduled release date in the US is November 1, 2013.

After an alien race called the Formics attacks Earth, the International Fleet prepare for the next invasion by training the best young children to find the future leader to lead the International Military. Ender Wiggin (Asa Butterfield), a shy but strategically brilliant boy, is pulled out of his school to join International Fleet and attend the legendary Battle School. After easily mastering the increasingly difficult war games, distinguishing himself and winning respect among his peers, Ender is soon ordained by Colonel Graff (Harrison Ford) as the military's next great hope, resulting in his promotion to Command School. Once there, he's trained by Mazer Rackham (Ben Kingsley) himself to lead the military into a war that will determine the future of Earth and the human race.
Click to expand...

Ender's Game was released back in 1985 so no Hunger Games influence to be found! Heck, if anything, the Jedi Academy in the prequels may have been influenced by Ender's Game as well.

Will the cinematography/screenplay/dialog have influences from our Jedis and Hunger Games though? I think I need to watch a carefully selected movie to reset my "movie similarity engine"! =)

Looks like a great movie for teens though. And I'll probably check it out in theaters.

haven't been to a theater movie in a few years, might have to go for this.

Only problem is Ender was supposed to be younger than the others. The only one smaller in the book was Bean.

I never really thought this movie would be made.

Writer
Less than two weeks away...hopefully I actually get to see this one in the theater.

I'm am very excited about this movie. Can't wait to see it on the big screen.

Oh I can't wait to see this. There is a short trailer like thing floating around and its looks brilliant.

Writer
Finally went and caught this (in the second-run theater)...great flick, though the book was far better, as is usually the case. Caught myself trying to remember how much they deviated from the book while watching, though...

I read Orson Scott Card's Ender's Game shortly after it first came onto the market some thirty years ago but I didn't rate it highly enough to keep on my shelves, so I haven't read it since. I could recall the broad outline of the story but remembered few details, so I watched the film with an open mind.

For any readers unfamiliar with the story, it is set in a future in which Earth is at war with Formics – aliens resembling giant ants – who had been beaten off after trying to invade some decades before but were now perceived as posing a renewed threat. The International Fleet defending Earth had discovered that children, intensively schooled in computer games, were faster at understanding and solving tactical situations in battle, so instituted a programme of training and selection to find the best. Their choice was Ender Wiggin, a boy who exhibited the right combination of intelligence, tactical control, and ruthlessness in battle. The story follows Ender through his training, climaxing in a final battle with the Formics.


I can't comment on similarities and differences compared with the book, as I read it too long ago. However, I formed the impression right at the start that the film was "the book on screen" type of adaptation, rather than a freer interpretation of the concept; the fact that the author was involved in the production might have had something to do with that. So the film starts with a rather clumsy voice-over infodump to explain the background to the story, about the aliens and the programme to train children, before the drama begins. It's the kind of thing that you might expect in a sequel, just to remind viewers what happened in Part 1. Once it gets going, the direction, acting and CGI are all handled competently enough, and the zero-gravity combat training scenes are convincing and entertaining. Despite this, I found that the film lacked a certain tension until the climactic battle; it had a rather routine, by-the-numbers, box-ticking air which left me feeling uninvolved. Good to have a conclusion which challenges the morality of an all-out interspecies war, though. It was just about worth watching, but rather forgettable, with the most memorable image being the Maori tattoo on the face of one of the characters!

Here is a StageVu divx .avi file of the movie
http://stagevu.com/video/smccphdxyodp
You will need a divx web player to watch it online.