Tagline: Evolution. Is this the beginning or the end?

Plot: Disaster strikes as a specialised team of investigators struggle to find out the truth about a strange monolith which sends out an intercontinental signal. 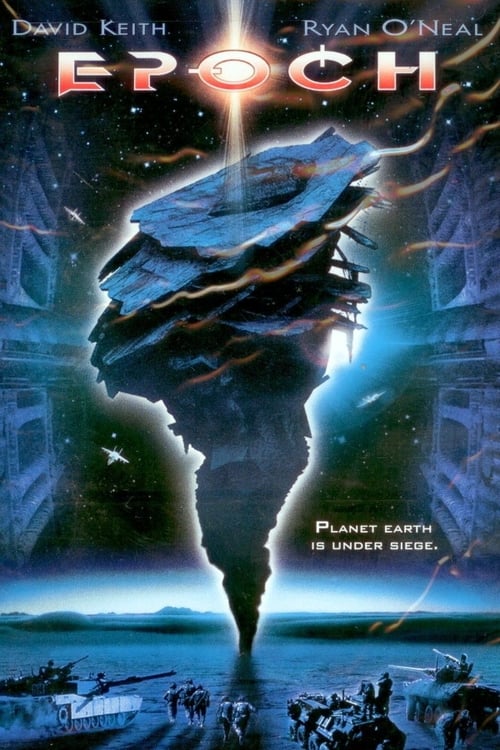 Staff member
Epoch is a 2000 made for TV movie that, on first glance, could be dismissed as yet another B-movie. Certainly some of the dialogue and action scenes would support that notion. It also raises a few questions that in a different medium, or even in a different movie, would have been taken more seriously.


In the middle of night a tragic scenes plays out as a mother grieves for her dead son. The small Bhutan village is isolated, the inhabitants simple. In the desert a bright flash of light erupts as something rises from below the surface. When the calamity is over a giant inverted cone is hovering of the desert floor. A mile high of ragged rock just floating.

Fearful of their Chinese neighbors on their border, the Bhutanese ask the US Government to investigate. Recruited, against his will, to assist is Mason Rand, a genius at breaking down & understand technology. Rand is a dying man. Mexican doctors have given him months at the most.

Dr. KC Czaban did not choose to have Rand on her team but her boss has insisted that Mason Rand is the only one who can solve the mystery. Rand arrives on site and quickly butts heads with Captain Tower, a stern US Army Captain who goes strictly by the book. The base doctor introduces Rand to a small boy. A boy whom his mother was grieving for just hours earlier.

In Washington at the Chinese consulate demands are being made for access to the object. Chinese troops are massing. Soviet made MIG fighter planes are screamings towards the object.

Time is running out.


Cliff Notes: The object turns out to be a machine that is as old as the Earth itself. It has great powers including the ability to quickly change human DNA. The boy was brought back to life by the machine and Rand's fatal disease cured. While inside the object Rand & Czaban are shown that the machine is used for terraforming. The last time the machine rebuilt Earth the result was Mankind but the time has come for it to be rebuilt again. As the machine releases a cloud cover meant to block out sunlight, resulting in the death of all life on Earth, the US Government makes the decision to detonate a nuclear device inside of the object. The future of humanity rests in the hands of Rand, Czaban, and Capt. Tower.
What follows is several hours of tense political stand-off between the US & Chinese Armies. The object can either be the salvation of mankind or its destroyer.

In short the movie asks a simple question, "What is God?", but it does not attempt to answer the question. Why are we here? Borrowing a line from Battlestar Galactica... did life here start out there?

Is it a well-written movie? No. Great acting? No. Amazing special effects? No. A decent sci-fi movie to watch on a lazy Sunday afternoon with nothing else to do? Absolutely. If the names "Spielberg" or "Bay" was attached to movie with effects done by Industrial Light & Magic then I would wager that it would perform well as a summer release at the theaters.

Long time Cool Sci-Fi community members have heard me use the phrase "Popcorn Movie" before and Epoch fits into that category nicely. Not quite worth buying on DVD for the collection but if it's on TV, then grab some munchies & a drink and just kick back& relax.

Staff member
Surely I am not the only one who has seen this movie!

So, related to the movie, here's a question for you to think about...

If a machine is capable of performing "miracles" - such as raising the dead & healing the sick - and is possibly responsible for our own existence, then at what point does it become a "god" or even the God?

I thought there was an amassed cluster of "sparkling" entities zooming around inside the big sugar-cone ? ... and they were the operators of the miracles (like her being pregnant with his child?), and pretty much unconcerned with attempts to stop them, only to stop "us" from our inherent suspicious/paranoid/idiot-like behavior?

You are correct in a good afternoon waster on a cold/blustery day, and not an owner.
Unless someone can explain it to me more than what I picked up from it?

only seen this movie once, realy injoyed it. i think i'll see if i can get it cheap anywhere