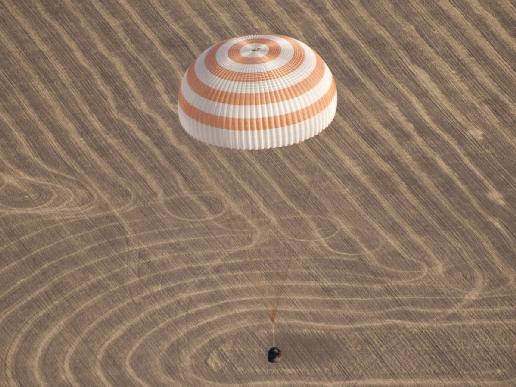 The Soyuz TMA-14 spacecraft is seen as it lands with Expedition 20 Commander Gennady Padalka, Flight Engineer Michael Barratt, and spaceflight participant Guy Laliberte near the town of Arkalyk, Kazakhstan on Sunday, Oct. 11, 2009. Padalka and Barratt returned from six months onboard the International Space Station, along with Laliberte who arrived at the station on Oct. 2 with Expedition 21 Flight Engineers Jeff Williams and Maxim Suraev aboard the Soyuz TMA-16 spacecraft. Image Credit: NASA/Bill Ingalls (More at NASA Picture Of The Day)